Not a day goes by without me having thoughts about looking for a better way to transport my worldly belongings safely with me. There will be at least one report everday of someone having had their belongingss snatched from them. Sometimes, the poor victim does not suffer only from the loss of the belongings but also her life as well. The situation has gone so bad that snatch thief victims are no longer women but men too.

It was reported in today's newspapers that the Nanyang Siang Pau crime editor (Chiew) has become the lastest victim of such a crime. His injuries are pretty bad from the report and when I read the article further, it was reported that the bag was slung around Chiew's body. I would gather it was not casually slung across the shoulder, where it would have been quite easily removed from the owner's grasp. Either the snatch thieves are becoming very desperate or they are getting more stupid. Don't they calculate the risks, the success and failure rates before they attempt to relieve their victim off their belongings.

Well, come to think of it, I had an ex-colleague who is a guy, about 5ft 8ins, weighs no less than 250lbs, had an idiot of a snatch thief making an attempt to grab his labtop bag. Mind you, that snatch thief was about 5ft 6ins, weighs no more than 140lbs. As expected, it was like a kind of tug and war thing for a couple of minutes.... with no prize for guessing who won. The snatch thief finally realized that he was not going to win this one, give up and ran off. The cheek of the man.. or the sheer stupidity. My ex-colleague could have just tripped, fell on to the thief and either suffocated the man or broke a few of his bones.

It looks like no bags are safe from being a potential target of these snatch thieves. It would also appear to be more dangerous if one attempted to sling the bag across one's body or wear it as a knapsack behind the back. I checked some websites with the hope of getting some ideas or availability of snatch-proof bags being sold in the market when I found these. 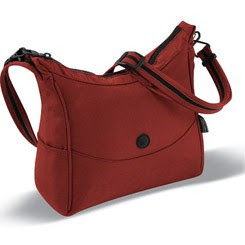 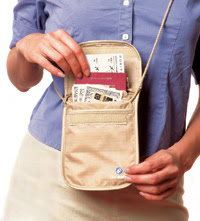 Security Neck Safe by PacSafe
Ideal for concealing your passport, money and credit cards in crowded places. This security neck pouch keeps valuables close, out of view, and protected from sneak-thieves and professional pickpockets.

Incorporated into the neck/shoulder strap is the patented Slash-Proof, adjustable, wire-reinforced strap, so it cannot be cut or broken. Comfortable and made with a breathable backing, the Pouchsafe neck pouch has a zippered compartment and two velcro sealed pockets for concealing valuables.

My friend JW has a great way of keeping her belongings safe. She wears tailor-made skirts with pockets. She will carry her mobile and keys in her hands and her purse will be in her skirt pockets. Well.. I suppose I can to... once I have gotten rid of my 3 sets of house keys, my diary, lip stick, lip balm, my loyalty cards and all the other stuff.. If only they allowed cargo pants to work, then I'd be fine. But until they do... sigh..

now days very dangerous!! specially girls carry thier hand bags!! my friend's mom got hit by helmet from behind! just for the handbags!!

oh dear..i hope your friend's mom is alright. Guys are also targeted nowadays too...we are living in a dangerous world :(

april Take a piece of me