Do you know a person for the longest time but not know that person at all? This is the story of me and my uncle Peter.

My late father came from a family 2 mothers and 13 siblings (4 sons and 9 daughters). His youngest sister, Auntie Rosemary is at least 20 over years younger than him. When I was born, many people thought that Auntie Rosemary and I were sisters because I looked more like her than her own sisters. When I was born, she gave me my “English” name. She travels to England often and she was the most “pseudo” mat salleh than any one else in the family. 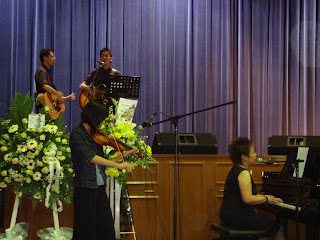 Uncle Peter married Auntie Rosemary in a beautiful wedding more than 22 years ago. I have met Uncle Peter a few times before the wedding day and I thought of him as a very nice man, though not my version of a Prince Charming, as he was not tall, dark or a kwai loh (as a kid, I only thought that Prince Charming came only in the kwai loh – Caucasian templates). He was Chinese, bespectacled, and had a bit of a pocked-marked face. But he was nice, kind and full of humor.

They stayed in Ipoh, whilst my family stayed in Ipoh. The only times we ever met was during Chinese New Year. So, it was the “hello” and “bye” thing.

Years later, when I started my first job, I met Uncle Peter again. This time, he was working in a subsidiary of the Group of Companies that I was working in. He has shifted his family to Kuala Lumpur. Better career prospects. I got to know him a little better then as he and Auntie Rosemary comes by to visit my family to pass birthday angpows, Chinese New Year angpows and other small family events. By then I had my own life and was hardly ever at home when he visited. 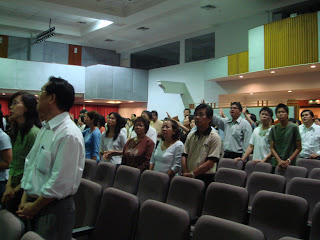 When I moved on to another job, I lost track of Uncle Peter until one fine day, he came and visited me at my place of work. He was promoting Unit Trust investments, which at one time was like the stable-product of every independent business owner. I found out that due to the economic rumblings in the job market, Uncle Peter had lost his job and he was trying to do whatever he has to do to keep the family afloat.

I truly enjoyed the talks we had as he was so knowledgeable and most of the time, his advices really sounded like one gives to a daughter, and not a client. He was doing this for a short while before he got a full time job. After that, my Unit Trust account with him was passed over to a colleague of his. And I kind of lost connection with Uncle Peter again. 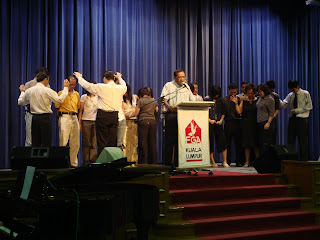 3 years back, I “found” Uncle Peter again. This time, he was with a Unit Trust company which my company had a project with. We did meet up once in a while during office hours but even that, it was not too often. My colleagues who met him also found Uncle Peter to be a nice person. We lost connection again soon after that. But I do hear updates of Uncle Peter and his family through my mother every now and then as he does visit her often, especially after my father’s passing.

The last and final time that I met Uncle Peter was last night. Uncle Peter is now 50 years young. He looked so peaceful, lying there in his suit, with his glasses on but his eyes were closed. He was lying there in his beautiful white coffin, with soft music playing, pretty flowers in wreaths all laid out. The saddest part is that I did hear from my mum about Uncle Peter’s fight with cancer but I didn’t not even manage to visit him once. 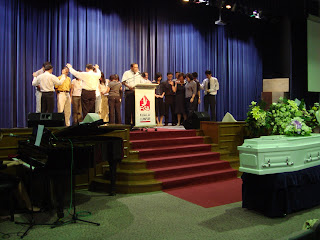 His battle started last October, when he was diagnosed with 4th stage pancreatic cancer. He kept it very quiet, within his family and his beloved church group. He told my mum about his battle only a few months after he has commenced his chemotherapy. My mum was surprised as he did not look like the typical cancer patient as he had a head full of hair, and he was looking rather meaty. Probably because of that, we did not think it was that bad.

During his memorial service last nite, I found out that his condition took a turn for the worse only after his treatment at the University Hospital to remove the lesions from his liver area. The downhill journey was terrible and the pain, the nausea, loss of appetite and everything which he had not felt earlier on came with a vengeance. He was totally ravaged by the cancer. The only thing that kept him lucid throughout this pain and agony was his family, his friends, his church and most importantly his God. Apparently, he was the one who encouraged all those around him to never question God, never be bitter about what is happening to him. God always has a plan, only thing that it may not be revealed yet.

Yesterday’s memorial was as beautiful as the previous night’s. People came up and paid tribute to Uncle Peter and it was through their eulogies that I got to know Uncle Peter for the man that he is. His pastor called Uncle Peter his Joshua (must read the bible to find out who this Joshua is), his friends called him a pillar of strength, his family found him to be their oasis and shelter from the world’s confusion and pain. 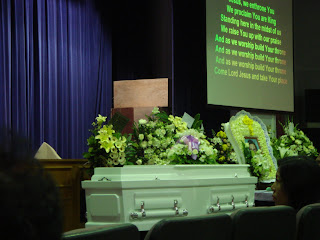 Everybody who came up to speak last night talked about Uncle Peter having gone back to God, to this better place… May that be so. May he have eternal life with his God… May he be truly happy and fulfilled to be doing what he wanted to do during his time on earth, that is to do his God’s work…. May his family be comforted by this and carry on his legacies…

It is raining now. I was not able to get leave from my office today due to meetings. His final memorial service began at 10:00am just now. It is almost 10:40am now. After the service, the cortège will take Uncle Peter in his last journey on earth to the crematorium. I am sitting in my office now, looking out of the window… waiting for the rain to stop, the clouds to break and for the rainbow to appear to signify Uncle Peter’s return to his God’s arms.

May I be able to meet Uncle Peter again when it is my turn to go… for I may have my lost my chance to know him on Earth… perhaps we’ll meet at this better place. So, Goodbye for now…Uncle Peter!

So sorry to hear about your uncle...

its quite a small world huh??

thanks for dropping by yeah!

I have met your Uncle Peter and he is a very nice man. A man of God and caring man.

Joshua is "God Salvation" He is a man of God

joyce : yeah.. he was a nice man. Thanks for letting me know who Joshua is, a man who is close to God.