Once in a while..a cooking miracle does happen.. :)

It is not an every day affair that I cook. In fact, it may not even a once in a week or fortnight affair that I cook. But when I do, I always pray for a miracle. There are times (mostly) where the food is barely edible but definitely never good enough to show-off or to brag about (blush..). But when a miracle does happen, then I would want to tell as many as I can that cooking miracles do happen haha...

I was cleaning the larder when I saw the bottle of Pregos which I got a few weeks ago and the reason that I got it was for the free melamine plate which comes free with it. Damn cheapskate yah? That was Saturday evening. So, on Sunday, went to the nearest supermarket to pick up some prime Aussie beef, fresh white button mushrooms and fresh basil leaves.

Prepared everything for cooking at 5pm on Sunday. Not even going to bother to put the recipe in here coz cooking spaghetti isn't really rocket science and I bet the food bloggers out there will have plenty of better recipes to share. Took me about 2 hrs to finish cooking (and that is because boiling the pasta-spaghetti took ages). Was doing all this while watching "Mermaid" on Astro. Rather moving parts in the movie which started my tear ducts going.. mmm.. no wonder I didn't have to add too much salt into the gravy.

When everything was done..it looked edible (which is much more than I can say for some of the other stuff I tried to cook up). No one was home.. so, how to show off leh? So, took out my camera phone, took a shot and decided who I can mms to. Could only think of 4 people. They were so very nice, all 4 of them... coz they replied :). 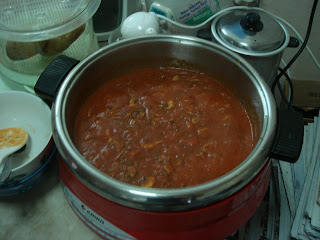 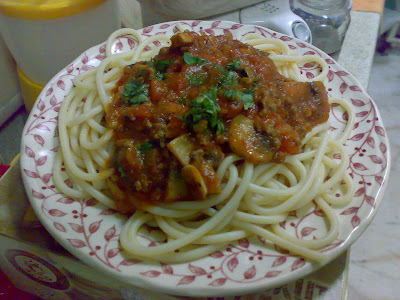 Now feeling kinda encouraged to cook more but for those who knows me well, nah.. the feeling probably will only last til this Wednesday...that lazy cow :p

...nasi briyani and sushi.. that was so long ago when we were mere "girls" heehee..

too bad i have to stave off carbs hahaha, until i grow thinner first :P or reach my ideal weight hmm, i think i'll start eating when i touch 80 again, kekeke, i'm supposed to be around 75 to be normal

Thanks for the sauce.. Please do it more often..

b@m : must search the bloggers for one who does great tasting non-carbs stuff..maybe babe can help us :)

joyce : this is my bribe to you to arm twist that no-good cuz of yours to invite me to his house for his christmas party...

deana e : that was a one time hit..wait til you see the disaster coming up next :P