I must have been living under a coconut shell or something. I have heard of a bikini wax but I never knew that there is a difference when one does a Brazilian wax instead. I learnt another new thing today :). 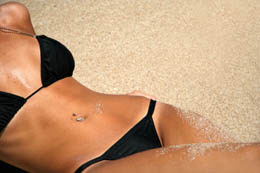 I am not sure how popular this procedure of a bikini wax is here coz I have never seen any advertisements in the papers or anywhere else.

I found a bikini waxing guide which would be useful if any gals or guys want to consider it. It goes like this....

"Bikini waxing starts with you disrobing and lying down on a table, you will usually be provided with g-string underwear but some salons do not provide this convenience. Then your pubic hair will be trimmed by the waxer because only around one fourth of an inch of hair is needed for the wax to grab hold to. Then the waxer will prepare the hot wax and spread the wax through the entire area with a waxing stick. After the wax has been applied, she will have to immediately apply a cloth strip above the wax while the wax is still hot and press the cloth to the wax. This is because the strip should stick to the wax so that when the strip is pulled, all the hair goes with it. Note that it will take a few moments for the wax to dry and harden before it can be removed. 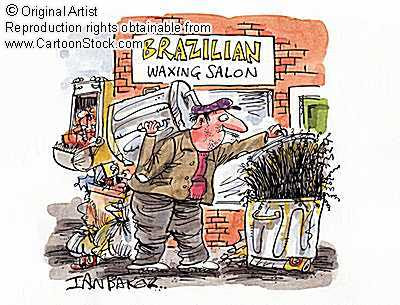 After the wax has been removed, it is inevitable that some stray hairs will remain; your waxer will then have to tweeze all the remaining hair to give you a smooth and hair free skin. Bikini waxing starts at the front moving to the back the steps mentioned above will be repeated several times during your bikini waxing session. Your waxer will ask you to shift to the most effective position for all the hairs to be removed so don’t be surprised to find yourself in odd positions during your waxing session.

When the waxing is done, the waxed areas will be applied with a soothing lotion so some of the soreness will be removed. However, you may find that there are ingrown hairs and bumps that will occur several days after you waxed, this is quite normal but you can also ask your waxer for advice to minimize these inconveniences. If you are on your way to your first bikini wax, you can expect that it is definitely hurt a lot at the start. But with all the advantages that bikini waxing provides, the pain for a few moments is definitely worth it."

So how does it differ from a regular bikini wax? Basically, with the Brazilian, hair is removed in the front, back & everything in between. Most of the time a 'landing strip' is left in the front, but some clients opt for everything removed. Ouch.. that must hurt like crazy.

If you are looking forward to buy a hot sexy bikini online, then http://www.verysexybikini.com is the ultimate destination for you. Enter the bikini world at the website and select your bikini from a whole range of bikinis available here, starting from Barely String Bikini, Crystal Bikinis to sexy Micro Bikinis and Plus Size Bikinis.

You wrote a very interesting article. And I agree with you. hair loss