The ugliest Muffins I've ever seen

Remember what I said about praying each time I cooked? This time I must not have prayed hard enough... Haha. Took 2 days off to do some personal errands and also in anticipation of a celebration and a long dharma talk on my Guru's birthday on the 24th of October. Guru's dharma session ended at 3am plus on the 25th which was considered short. Most of the time, his sessions will end at 5am or so in the morning.

So, managed to get enough sleep by about 9am in the morning and with really nothing much to do, decided to try an experiment with baking with my old oven (those el cheepo ones without a fan). 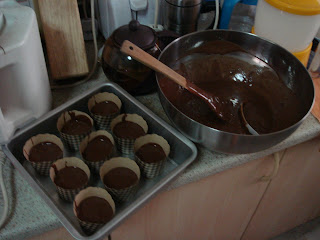 Everything was going quite well until after I shove the muffins into the oven. Firstly, I didn't really get that fantastic smell that I used to get with the other oven with the fan. When I took those muffins out eventually, the first thought I had was "Gosh.. those must be the ugliest bunch of muffins (if you could even call them that) I have ever seen". By the way... they are supposed to be choc walnut muffins...buahaha 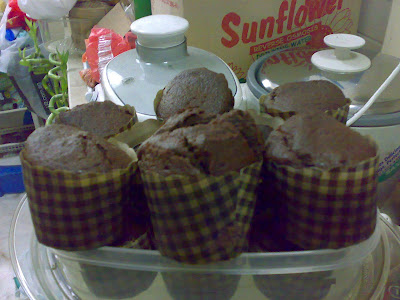 Need to post them so that if ever they had an Ugly Muffin contest... these will definitely win hands and ladles down. MMS-ed to several people about my lot of disasters.. with the hope to get rid of them. So far.. only 3 takers...JW, her sister Jean and my friend Tobiyama. Been walloping about 2 of them each sitting myself ... just to get rid of them. Not going to offer babe or fishman ... too embarassing.... and dcky is on a carb free diet... else he might be a good choice too hahaha.

for me I won't care as long as it's yummy :P

arrghh how come i dun have any??? as long as it taste nice i dun care how it look :p

edward : you sure you really want to join the test bunnies ah... might have to eat my experiments blindfolded wor..hahaha

babe : wait..i will give u once i achieve better looking ones...u great food blogger leh ... different class wor...cannot be in this list of test bunnies who are supposed to eat my disasters as well heehee

Aiyo...I con't complain about free food wan...well not directly to that person anyway. I just blog about it...hahahaha

fishman : yeah.. i know... why do you think you didn't get any of those little disasters..haha

It doesn't matter what they look like...as long as they taste good...because we all know it looks even worse when it comes back out...so no worries...I'm sure they were tasty

hahaha yeah i can't have any now, hmm after next week i should be able to consume some bits of carbs :P if you have any kakakaka, i'll be glad to take them off your hands if they are yummy.

kt : aww...you are so sweet.. the next time I make a batch of better looking ones.. i will definitely think of you :)

b@m : how's the carb free thing getting on? maybe we'll talk abt it after your wedding in Dec? haha

yea after that mebe go back to normal eating bwahahha