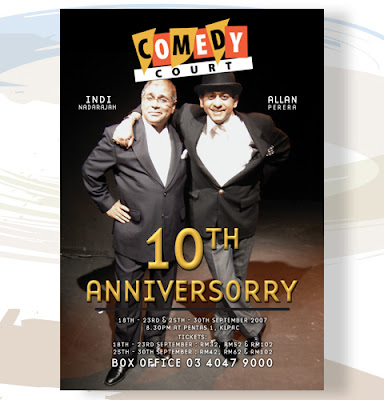 
It's time to celebrate 10 years of fun and laughter with Comedy Court's anniversary show from 18 September to 30 September 2007.

Malaysia's foremost Comedy Courtiers, Indi Nadarajah and Allan Perera, have been delighting audience in their alter egos as Loga and Singam, the two Dato's, KC and TC, Myrtle and Thavi in such memorable acts as Quid Pro Quo, Res Ipsa Loquitur, The Executive Spa, Who Wants to be a Billionaire, Men-a-pause, The Usual Suspects and The Comedy Court Review.