Hi Hi.. I am back after a few days away from the office. It was tiring but great to be able to do my own things. Actually, I did do quite a lot, just within KL and PJ. But firstly, I just want to share the Yulan Festival celebration which I happened to come across at Bangsar Lucky Garden last nite. 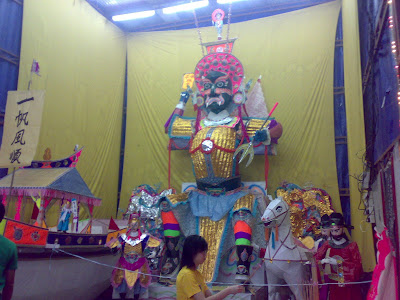 Tai Su Yeah (King of Hades) in his full regalia 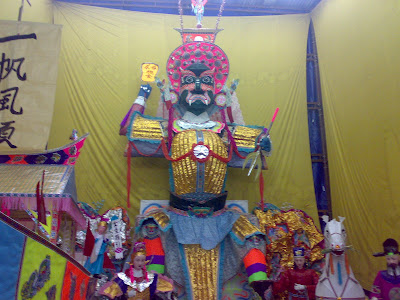 
The Ghost Festival is a festival celebrated by Chinese during the seventh lunar month of the year. The highpoint will be the 14th night when it is the real ball for the ghosties and spirits, including those deceased ancestors. In fact, the entire 7th lunar month is really "their" month to come out from the lower world to visit earth. There will be ritualistic offering of food, and burning of hell money and bags containing cloth (paper) to please the visiting ghosts and spirits of the ancestors, as well as other deities. 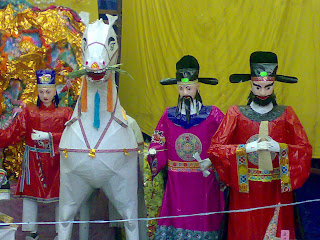 Other activities include, burying and releasing miniature paper boats and lanterns on water, which signifies "giving directions to the lost ghosts and spirits of the ancestors and other deities." A very solemn festival of ancestor worshiping, the festival nevertheless represents a connection between the ancestors and the descendants, the living and the dead, earth and heaven, as well as body and soul. 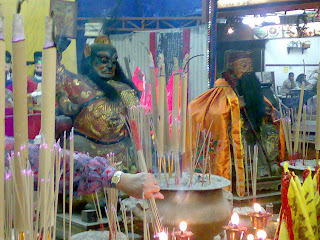 Invited deities from the nearby temple 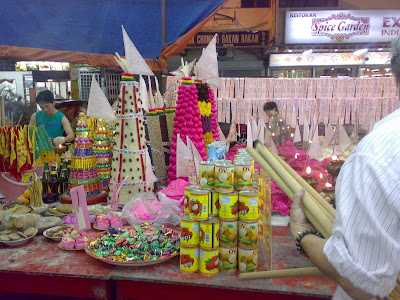 Some of the goodies and offerings


In addition, there will be also performances held to entertain everybody but I am not to sure if it was the living who were really enjoying it more. It was the performance that drew my attention actually as in the middle of my meal, I heard the woman's voice singing in Hokkien. Immediately, I thought of the newspaper article recently about prohibiting performers of such events to refrain from wearing bikini tops. Hot pants were apparently allowed. So, quickly finishing my dinner, I quickly ran over to have a look but shucks.. it was the man's turn to sing with a few of his backups. It was drizzling slightly but surprisingly, people were really bearing with the weather for free entertainment. As the rain got a bit more dense, I had not choice but to leave. Not scantily clad performance for me this time but there'll be a few more days before the end of the 7th lunar month. Maybe I can still chance upon another performance in another housing area. 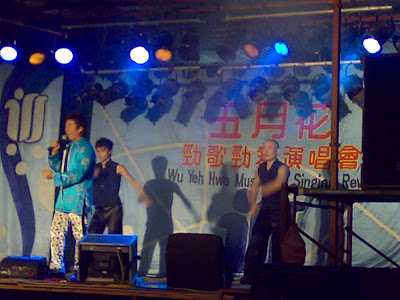 One of the performances for the nite
Posted by Unknown at Thursday, August 23, 2007