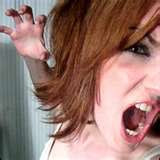 Getting cheated is undoubtedly a heart wrenching aspect for anybody and understandable there are those of us who might crawl into a dark corner and nurse our wounds? Naaaahh who are we kidding? We are more vocal and we take action nowadays … yeeeeahhhh! 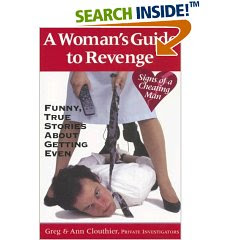 There is an interesting article in the newspaper today on exactly this issue starting with the one where Ingrid Tarrant vented the full force of her disappointment by publishing in the tabloid newspapers that Mr. Tarrant was a “clumsy, naïve lover who comes in smelling of fish and took Viagra after suffering bouts of impotence. Sally Graham-Moon became a female icon after snipping a sleeve from each of her philandering husband’s 32 Savile Row suits, pouring 5 litres of white paint over his blue BMW and depositing bottles of his vintage claret on neighbors’ doorsteps. Diana, Princess of Wales had a dazzling little black revenge dress. Della Bovey dolled herself up and danced along to the song “I Will Survive” on the night she was faced with her estranged husband and his new lover and Emma Thomason filled her plasterer boyfriend’s work van with all his belongings and rolled it off into the marina at Whitehaven.

I think we girls here do have some tricks up our sleeves (of coz we’ll just share them amongst ourselves) but nothing fancy or anywhere near as publicized forms of revenge. Most of the time we would just play those wonderful and evil scenarios in our minds but it would be in the heat of the moment. I would think that it must never be actions that are too extreme as to land us in any serious trouble coz nobody is not worth getting thrown into jail or messing up our futures for. But Ananda Monti did just that when she landed up in jail after ripping off her former lover’s left testicle in a fit of pique (ouch!).
Posted by Unknown at Thursday, August 16, 2007

that's why, most of the greatest empires fell, because of women. Hahaha

yeah.. coz they didn't have great women behind them mah..... behind every Great Woman is a Fabulous Gay Man...