Many moons ago when I was still blogging under my friendster account, I remember signing off as a BITCH…”Babe in Total Control of Herself”. I forgot all about it until I saw this very interesting book at Borders last week. The book title read “Why Men Love Bitches – from Doormat to Dreamgirl”. I found that the author of the book Sherry Argov has very interesting opinions on this. Of cause I don’t agree with everything she wrote in her book but there were much that made a lot of sense.

I reckon being a bitch does not equate one to being rude or manipulative or catty. It is rather about standing up for what you believe in and also holding up your own. This is especially in a relationship. Yeah.. being one half of a whole does not really mean that you have to lose your identity. I’ve got girl pals who seemed to have lost their abilities to make decisions without consulting their hubbys or boyfriends for everything. Oh please.. don’t you know that it may be cute at the start but after a while, it becomes heck of an irritating thing to endure. Don’t be a lallang (akin to a willow). Stand up for your right to have an opinion.

I believe that a woman should be strong, self-assured, fiercely independent, feisty, no-nonsense especially when dealing with men. That is precisely what Argov is advocating in her book that this is the type of woman that can hook a guy, keep him on his toes while being wrapped around her finger, leaving all the nice pansies in the dust.

The celebrated French beauty Juliette Recamier once said “No woman is all sweetness”. Actually let’s be honest. Nice girls tend to be taken for granted. There were so many cases sited in the book that I could really place real people that I know in it. So, what attracts and appeals to a man? A feisty attitude is rather attractive to a man as men are born to be highly competitive and also “They love the thrill of the chase,” says Sherry Argov. “The cat and mouse chase that women find maddening is very exciting to men.” Argov explains that more often than not, this is the scenario: “For a woman, the objective is often a committed relationship. For men, the road trip to the destination is often the most fun.”

Men love challenges. If they have to go out of their way to see you, it’s an accomplishment. If you are “served to them on a platter”, the entire thrill is taken away from them. “The Bitch understands that when a man wants something, he’ll go after it, and going after it makes him want it even more,” Argov says. “A bitch seems more attractive to men because she’s a little more aloof, is more focused on herself, and hence has little interest in taking away his freedom. The Bitch is self-centered in a way: She chooses to develop and nurture herself first, before any one else—and focuses on herself, rather than on a guy”.

So girls… time to grow up and be a BITCH. 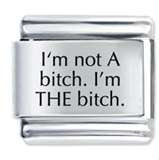 Btw.. her other book is entitled “Why Men Marry Bitches” :) 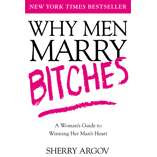