I was told that all the tickets have been sold out for this week and maybe even next week. I hope my friends will make up their minds soon about watching this musical. Have heard fantastic reviews about it.... so how.. hurry hurry.. 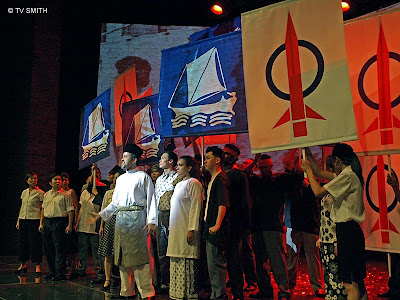 The cry reverberated across the stadium and echoed in the crowded stands to be flung back again by the amplifying horns. Merdeka, Merdeka, Merdeka - seven times Tunku called. Seven times came the deep, excited response.

TUNKU – the musical has all the colour, drama, excitement, anticipation, heartache, sorrow and uncertainty of that fateful Saturday morning of 31st August 1957, and what transpired after.

The musical takes us on a 50 year musical journey that focuses on four specific timelines:

Interwoven through these four timelines are stories and characters that give us some insight as to the effect Merdeka has had on and its people. The hopes and ambitions that Tunku had for his beloved country are expressed by characters created for the purpose.

It would be wrong to assume that Tunku – the musical, is a project wallowing in historical propaganda. It is, in fact, the absolute antithesis of that. While the play utilises actual historical events, the characters and their actions are purely fictional; designed with a dramatic purpose in mind. The story is not so much about Tunku, but more about the way we are because of him.

Starring Tony Eusoff, Syuk Ibrahim, Douglas Lim, Zamil Idris, Maria Yasmin, Doreen Tang and Evelyn Toh, the musical will have, as its core, over 20 original compositions. Spoken dialogue will be kept to a minimum as the thrust and dramatic flow of the play will be expressed in song, dance and historical footage. The music will be played live, on stage, by an estimated 25 piece orchestra.

Written, and lyrics and music by Lim Chuang Yik and Teng Ky-Gan, directed by Joe Hasham, musical
direction by Mervyn Peters and choreography by Joseph Gonzales.
Posted by Unknown at Thursday, August 16, 2007