My date with Tarap Man

I was already at Central Market at 8pm last night waiting for Tarap Man. I've asked several friends if they would like to come with me. Some were busy, some had prior engagements and some were just simply not interested. So, I had no choice but to go meet Tarap Man on my own.

When I reached the 2nd floor of The Annexe Central Market, I realized that I was not the only one who had an "appointment" with Tarap Man. I overheard someone say that there were about 80 of us here tonight. I noticed several indies (independent) musicians there. There were also quite a number of artsy-fartsy looking people here too who spoke with a slang that truly classified themselves as pseudo mat sallehs. Then there were also some who were dressed just like me.... in jeans and a T.

It is now 9:40pm and so far, all I had were just glimpses of Tarap Man. Have not gotten to know him at all. I have heard much about him especially the part about him having killed his own mother, digging her eyeballs out and storing them in a Milo tin. Apparently he also dug out the eyeballs of 10 other people after that... 5 men, 3 women and 2 Mak Nyahs (cross dressers/transvestites). He was named Tarap Man as tarap is his favorite fruit. He was caught by the police whilst enjoying this fruit. However, they were not able to find his mother's eyeballs, which the police suspected were swallowed together with the Tarap fruit.

Finally, Tarap Man came out at 10:10am. He didn't not exactly walked in. He kinda limped in. The next minute, he was atop the table, speaking rather loudly. This guy is absolutely batty. Could not make head or tail of his words. He was in a world of his own... looking at the world through some distorted lens. He is more nutty then a whole bag of pistachios.

This was my 2 hours of experience with Tarap Man, a play written by Ann Lee and a Kuali Works & Dramalab presentation. The storyline is simple, the acting was not exactly brilliant. However I was rather impressed the different usages of different angles of the stage, the various rooms at the Annexe as settings for the play. It was rather an new thing for me to watch the play on the stage floor, at the alcove which was above the stage, the room next to the stage with an camera positioned inside so that the audience can opt to watch it off a white screen and what was even more awesome was the audience were actually forced to vacate the room to the next hall during intermission, with the next Act played in the room where the audience were relaxing during intermission. Wow.. I like.. I like.

Overall, I must say that it was a very good effort. Wish my friends were there as such experiences makes watching local productions so worthwhile watching. And much thanks to my dear dear friend MH for the comp ticket...hugz :)

Photo courtesy of of Kakiseni

This is Tarap Man - Photo from The Star 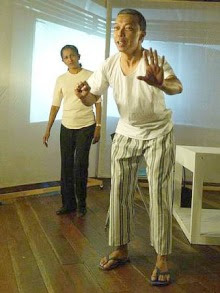