Mmmm.... when you give into your cravings...

Still having some food cravings left, despite wolfing down a plate of nasi lemak down for lunch. Apart from the thoughts of durians that the Two Superheroes planted inside my brain, I was still thinking very much of the Secret Recipe's Cakes that I would have bought if it was not raining that day, if there was a Secret Recipe outlet which was in the promotion outlet-list nearer my office, if I was not stuck in a 2 hr jam getting home that evening... and on and on ... the excuses.

Since it was drizzling lightly after lunch and I was not able to get back to the office without getting rather damp after that, decided to convince JW to accompany me to the Secret Recipe outlet at the Weld. To satisfy the cravings and the feeling of having been cheated out of the damn good deal of a buy 1 cake and get the 2nd for free...... I decided to get a 1 + 1 promotion.. which in this case was a buy 1 slice and pay for the 2nd slice too, haha.. i order my favourite Oreo Cheese and to feel a little less guilty, I order the sugar free chocolate as the 2nd slice. Order a latte for JW and I just took warm water... healthier and less fattening...buahahaha.

Wow.. the Oreo Cheese was heavenly. JW and I ate gobbled it down before I could even remember to take a photo of it. So, have to go borrow a photo from Sato's photopages 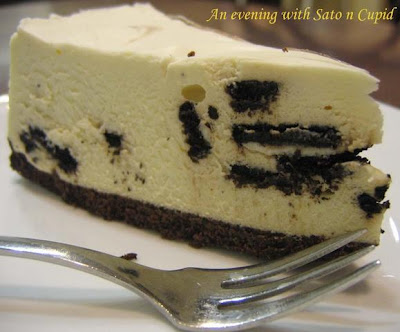 Oreo Cheesecake from Secret Recipe
The 2nd piece was not that great.. rather dry and a whole world of difference compared to the Oreo...so, not even bothered to take a photo of that ... even though we left about 1/2 a slice untouched.

Was asking JW if she had the recipe for the Oreo Cheesecake. She said "No idea". Should have remembered... she is a breakfast type of cook only... she said so herself wor.

The rain was still drizzling but we managed to catch a ride with a colleague back to the office. Since babe was not around, I quickly googled for Oreo cheesecakes and i found a goldmine. Going to safe these pages and then "salivate" over my keyboard whenever my cheesecake cravings surfaces.

Aiyoh...the durians! Y, you should get over to our place. There are loads of durians selling here. Jelak of seeing that cute, spiky fruit already! :p

Hahah...1+1 promotion..that's a good one! I love Secret Recipe's Chocolate Indulgence. Sinfully good. Haha. Bad for diet but extremely good to cheer me up!

Hello!
I am here, i still prefer the SR cakes.
For me, they are the best one.
=)