My friend MHKK sent me this invitation to watch "Tarap Man" next month at the Annexe Galeries, Pasar Seni/Central Market, KL. He mentioned it before and I was wondering what "Tarap" is. Actually it is a fruit that resembles the cempedak. It's scientific name is Artocarpus Odoratissimus: pungent fruit, indigenous to Borneo

Back to Tarap Man. 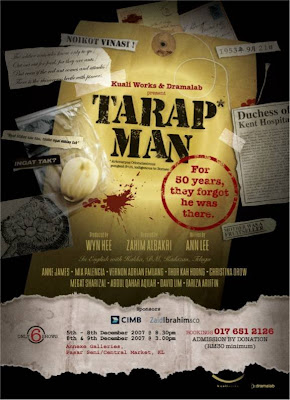 It is a journalistic thriller set in Sabah….
A newspaper reporter sets out to discover the truth about a boy,
born during the war, who may have committed a gruesome murder in 1952.
Could he still be in prison?


From Table Mountain to Teluk Intan.)

if you have the time, do try to watch it Kenny.. may be worth your while :)

haha.. a little bit difficult to pirate it coz this is live acting.. but you'll never know :). have a great weekend kljs