My precious Guru H.E. Tsem Tulku Rinpoche is unwell again.. and this time is as serious as the last. We all received sms-es and emails requesting us to do prayers and light tea candles for him. The magic number to offer was 50. By the time I got back, ate dinner and washed up, it must have been close to 11pm. I was not going to light 50 candles outside the house and have the neighbors watch me behind their curtains.. thinking.. "this woman is either a nut case... an arsonist wannabe.. or worst..doing fishy voodoo-vy stuff..."

I decided that it would be better to do it inside the house where I could also keep an eye on the candles until they go out. I was not going to sit outside the house ... all by myself.. no, that is not so bad.. what if other "beings" decided to join me at my little mini bonfire. So, I got me this (which I thought was a damn sturdy) tray which I bought from Ikea and lay 50 tea candles atop it. Place this in front of Lord Dharmapala Setrap in my Tara Room inside the house and began my prayers. 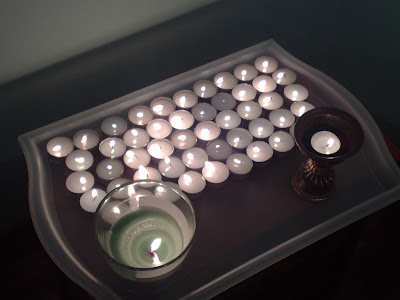 20mins into prayers...sniff..sniff.. something sure does not smell right. Wah.. the tiny tea candles which was aligned in straight lines now seemed to be doing a wavy formation...mmmm.....what's that.... water on the tray... no... it was melted wax.

I was in the middle of a chant so decided to just shove a metal tray beneath the plastic one and continued with my praying... thinking.. just a little bit of wax what..

Waaaahhh...the flames from the tea candle seem to have grown bigger.. coz they were burning off a bigger pool of wax now...waaaahhh...panic.

That was a close call. The whole room was choked full with smoke.. opened all the windows and switched on the fan full blast. Sat down.. finished my prayers.

By the time I finished cleaning up... coz there was wax and water all over the floor...I only managed to get to sleep at 2am... served me right for being so stupid. 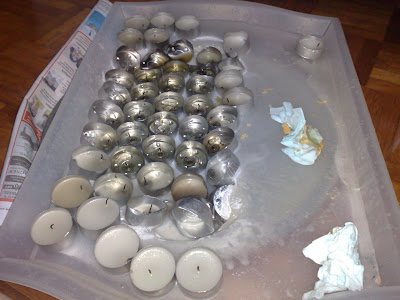 Plastic Tray for your Candles? Essh.. that is why you always need fire extinguisher at home.

my goodness you lucky you didn't set your house on fire. wah... the tray like melted.

sharkgila : ya lor... when the flames jumped.. i also jumped..even higher :p

seo : yah.. when you put it that way.. i feel like such an ass...(turn away in embarassment)..Happy Hols to you too :D

Wow....Y! what a close shave. Don't align your little cutie candles like that again, ok? We still want to have our darling Y to blog here. Haha.. :p

Lucky you managed to bring it under control! Be careful next time.

twosuperheroes : thank u my dear lovely superheroes.. once burnt (ouch).. now a little smarted.. use ceramic tiles instead of plastic now heehee...

babe_kl & kljs: ya lor.. thank goodness still got some gray matter up there to think of a damp cloth.. else.. i'd be looking a bit more tanned this christmas ;)