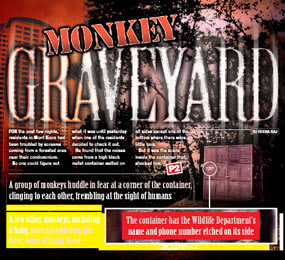 Is cruelty a base nature of humans? I hope not. There was this article in the Malay Mail (MM) this morning which read "Monkey Graveyard". My immediate thought... "Was this Monkey Graveyard" a similar concept to what the Americans have for their pets... a Pet Cemetery? Until I read this "A group of monkeys huddle in fear at a corner of the container, clinging to each other, trembling at the sight of humans."

It is so very sad to read such articles which clearly shows the evil side of man or the "tidak apa" (couldn't care less attitude). It was reported in the Malay Mail that for many nights, the residents of Mont Kiara have been disturbed by screams coming from the forested area near their condominium and only with checking by the curious residents that the gory truth was discovered.

They found a metal trap with 18 monkeys trapped inside. Apparently some were already dead in this trap, due to starvation and dehydration. I would think that even with the kind residents and security guards trying to feed these trapped monkeys with food and water, if they are not let out soon, more will eventually end up dead.

It was also reported in the MM that this metal container bore the name of the Wildlife Department's name and telephone number. This could be their attempt to remove the monkeys from the posh residential area as they were proving to be a nuisance. However, there are better ways of handling the problem and if the intention was to trap the monkeys for relocation, then more efforts to follow-up on the exercise.

When the various departments were finally contacted and queried, that is when the Witch Hunt started. MM called it the "Blame Game". 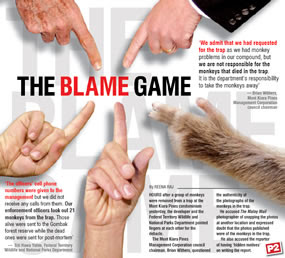 ‘We admit that we had requested for the trap as we had monkey problems in our compound, but we are not responsible for the monkeys that died in the trap. It is the department’s responsibility to take the monkeys away’ — Brian Withers, Mont Kiara Pines Management Corporation council chairman

‘The officers’ cell phone numbers were given to the management but we did not receive any calls from them. Our enforcement officers took out 21 monkeys from the trap. Those alive were sent to the Gombak forest reserve while the dead ones were sent for post-mortem — Siti Hawa Yatim, Federal Territory Wildlife and National Parks Department. Basically, The Federal Territory Wildlife and National Parks Department denied that it was their fault.

'IF you requested for a monkey trap to be placed in your housing area as a solution to end the nuisance monkeys cause in your area, then it is also your responsibility to inform the Wildlife Department as soon as a monkey is trapped.' Vice-president of Bukit Bandaraya residents’ association, K. Kanagaandram, made the statement to refute accusations by Mont Kiara Pines Management Corporation council chairman Brian Withers on Monday. He further went to thank the Wildlife Department for its excellent service in trapping more than 100 monkeys in the area the past year.

The Malay Mail reporter and representatives from the Society for Prevention of Cruelty to Animals had been denied entry into the compound where the trap was located until after the meeting. SPCA representatives took an injured monkey, which they found some 20m from the trap, which they deduced was suffering from heatstroke as well as head and tail injuries, to the Veterinary Services Department for treatment.