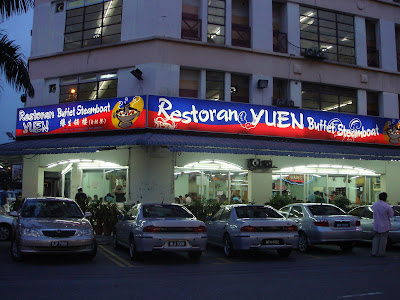 I went with a couple of friends last week to meet up and celebrate the November birthdays. We were not sure where to eat as most of them were getting rather picky over food as the seasons of weddings have started and too much of the good restaurant food was getting rather boring. So, one of the girls suggested to we give Restaurant Yuen Buffet Steamboat a try.

I was the first of the lot to arrive and since there was about 10 of us and the place was looking like it was filling up fast, I decided to walk in first to book a table for us. The waiter asked me how many and since I was not exactly sure, I told him that could I have a table big enough to seat 10 to 12 persons. The waiter told me that I had to be certain of the number of people turning up coz if I took a table to seat 12 people and only 10 turned up, we would still have to pay for the 2 persons that did not turn up. The cost of the buffet is RM18.80++ per person. So, I called up my friends and confirmed a table for 10.

The selection was not too bad, for the un-cooked stuff, i.e. those that you get to plonk into your clear soup or tom yam soup. As for the cooked food selection, they had fried rice, fried beehoon and barbeque chicken wings. They had 4 types of kuehs, 2 varieties of fruits and ice-cream. 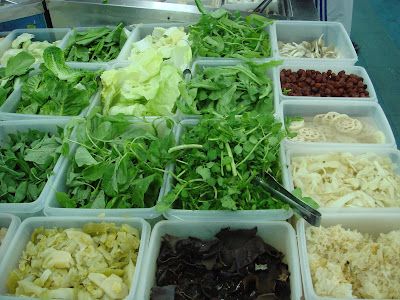 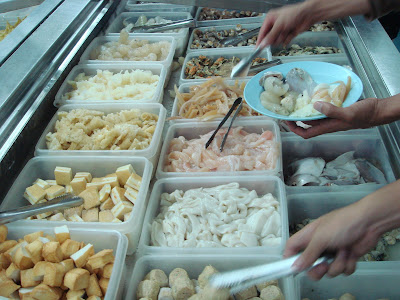 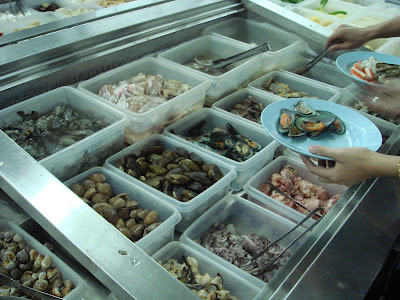 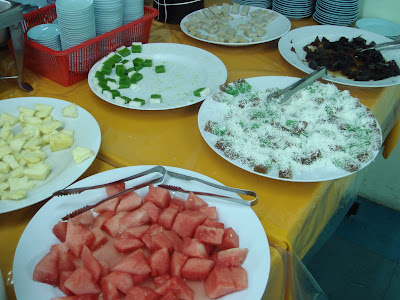 My friends all turned up within the next 20 minutes and the timing must have been right as suddenly there was a commotion at the cooked food section. As this was the first time for me and some of my other friends, we were quite curious as well as concerned as to what happening.

It turned out that the people were "fighting" to get at the chicken wings. Our table of 10 managed to get 1 piece haha.. can't beat the young fellas (many college students were there as it this place is probably their weekly Friday treats). We later realized that these barbeque chicken wings come out from the kitchen at 20 minute intervals and there were only about 25-30 pieces each time. And we also noticed that there was a table of young college guys next to ours who would send at least 3 to 4 of their friends to "grab" these (actually, very delicious) wings. They would normally time it so well that just about a minute or two before the chicken wings come out from the kitchen, they would already be standing next to the table with plates and tongs in hand. 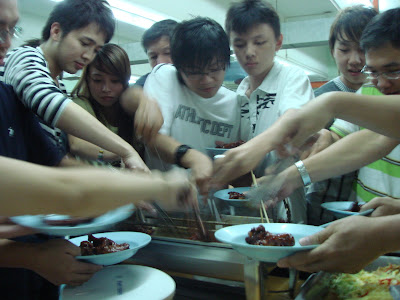 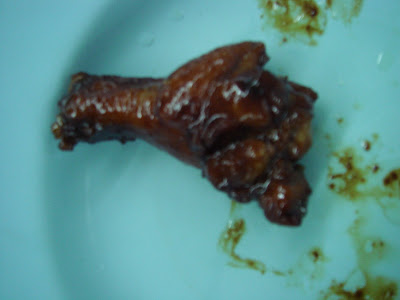 We stayed for about 2 hours and watched 5 to 6 rounds of this chicken wing thingy and without fail, the same group of fellas will always be there waiting. I think the rest of the customers gotten wise after that and just gave up. Just before we left at about 9:30pm, some other customers finally gotten to taste the chicken wings.. perhaps like us, we had to share a piece of the wings between 2 of us (we only managed to grab 6 pieces during the entire meal) as the fellas were still there grabbing them wings :). This is the winning table who won and at most if not all the chicken wings... 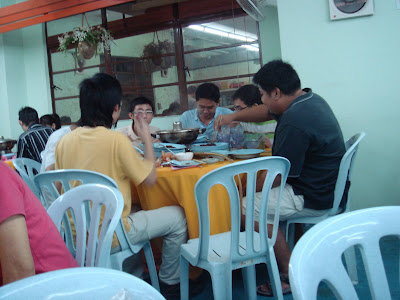 Not bad lah coz at the end we were completely sated for a mere RM22 per person, inclusive of drinks, which were mainly chinese tea and herbal tea.

The restaurant is located at 32A-1, Jalan PJS 8/6, Mentari Plaza, Bandar Sunway. Person to call for table bookings is 016-2086678 as it was very packed the Friday that we went. I can imagine the weekends.

The grabbing of food seems to be quite a common trait amoung Malaysian.
Where is this place ? Look nice... I like steamboat

Yeah.. another typical Malaysian behaviour. This place is located in the vicinity opposite Sunway Pyramid.

yep the corner lot, you should be able to see the logo as you go past LDP through sunway area. you can park near mcdonalds and walk over, but be forewarned that when you walk out of the restaurant it'll be the best fresh air you've breathed for the last 2 hours or so you've been in that restaurant. LOL

dcyk: Have you tried the one opposite the road from Yuen? It was either Yuen or that one.