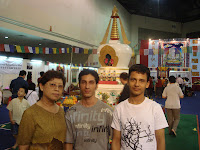 WOW… it really has been a fantastic weekend. The activities happening were just unbelievable. It started on Friday evening, despite the rain, the feeling was fantastic. Went off the minute the whistle blew at 5:30pm for work to end for the day. Rushed over to SS2 to pick up some friends and headed straight for the MINES. Did I make that sound like we were there at the wink of an eye? 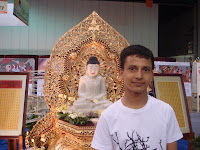 Actually we were stuck in the after hour jam for almost 2 hours before we reached the MINES. Upon reaching the MINES, I have 3 nice friends who quickly volunteered to be my “models" for the nite. There was soooo much to see (haha.. for those you who missed it all, I feel soooo sorry for you. Maybe next year). My friends Mitra, Rajendra and Maggie..these are for you dearies . 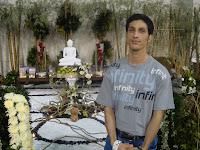 On Saturday, it was rushing here and there in the day time, running errands, paying bills, doing groceries and all that was after doing house chores. The day just flashed by..but by the evening, finally, managed to put my feet up (sorry, cannot coz the guy in front of me would have amputated them off), paid 42 bucks and laughed myself silly watching the antics of my fav Aflin Shauki, Rashid Salleh, Douglas Lim, amongst the few at Actorlympics (haha..again, for those of you who missed it all, I feel doubly soooo sorry for you! Maybe next round)http://www.theactorsstudio.com.my/.

Sunday morning…woke up in a flash as I knew that this would be a long but exciting day for me. Boiled water, feed the dogs, the sugar gliders, steamed up a char siew pow, and rush off to do my volunteering work at DMT (please refer to my previous post). A rather slow morning there as people were either in church, in the temples, at the MINES or arrgggghhh… in bed. By about 2 pm, decided to be my own customer. Picked up a book, paid 60 bucks and decided to cop out of there and headed to the MINES instead. Once there, WOW.. the first person I met there was WWWWWOOOOOOWWWWW…Amber Chia. She is soooooo pretty. Took like a million shots of her but will only post one here… just to tempt you. When she came over to our Kechara booth, she almost started a stampede. The people were going “Amber, Amber, Amber”.. a new mantra?? She so kindly allowed us to take photos of her and with her.. some of the guys almost swooned when she flashed that pretty smile at them. When she left for the next booth, everybody was still talking and talking about her. We were so lucky to have her stop by and these were all thanks to our Rinpoche’s 2 students, Eric Choong and Bill Keith, who are close friends of Amber. As usual, our most kind and most precious Rinpoche had his assistant Jenny, present gifts to Amber for her visit to our booth. 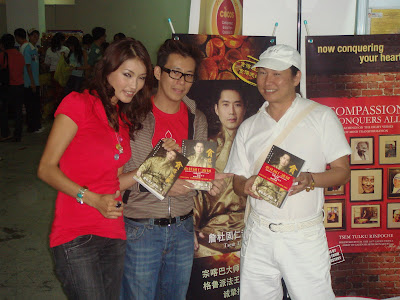 I heard that the festival should have come to an end at 6pm but due to the tremendous response from the crowd, the organizers decided to extend it until 9pm. But we were there, with some other exhibitors until about 10pm. If they has let us stay, we would have stayed the entire nite til morning. But then all good things have to come to an end. Geez, what a beautiful end to a beautiful weekend … mmmm (sigh of satisfaction).
Posted by Unknown at Monday, June 11, 2007