The True Meaning of Valentine's Day

Little Melissa comes home from first grade and tells her father that they learned about the history of Valentine's Day. "Since Valentine's Day is for a Christian saint and we're Jewish," she asks, "will God get mad at me for giving someone a Valentine?"

Melissa's father thinks a bit, then says "No, I don't think God would get mad. Who do you want to give a Valentine to?"

"Why Osama Bin Laden?" her father asks, reeling in shock.

"Well," she says, "I thought that if a little American Jewish girl could have enough love to give Osama a valentine, he might start to think that maybe we're not all bad, and maybe start loving people a little. And if other kids saw what I did and sent Valentines to Osama, he'd love everyone a lot. And then he'd start going all over the place to tell everyone how much he loved them and how he didn't hate anyone anymore."

Her father's heart swells and he looks at his daughter with new-found pride. "Melissa, that's the most wonderful thing I've ever heard!"

"I know," Melissa says. "And once that gets him out in the open, the Marines could blow the crap out of him!"

I'd just like to wish everybody a Happy Valentines Day, whatever this day may mean to each of us... just let us have a happy one. 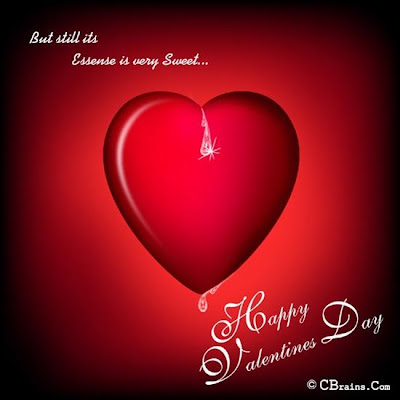 Happy Valentine's Day, Y!! Popping any champagne tonite??? Whatever it is, enjoy yourself today ok.. :p

hee hee..no champagne wor..but after reading the post by Raising Mercury this morning.. I am going to pop in a few yummy cupcakes from the Curve leh..you want some??

Conniving little girl! Ahaha.. Happy/Pleasant/UnSad Happy Valentines Day to you. OMG, i have been at the computer all day and haven't done anything yet. NOOOO.. the day is ending very soon!

hi hi usws...never mind wor if being at the computer made you miss the major part of VD..the chinese VD is next Thurs 21st..one more chance heehee..