The Season of Eating has Ended!

I just realized that yesterday did not only officially mark the 15th day of Chinese New Year and the end of the Chinese New Year celebrations, but more importantly, the end of the season of feasting and fattening. The ball started rolling when Hari Raya was celebrated in October of last year, all the lovely cookies and rendangs..... and that continued on to Deepavali, the yummy cookies, murukus and oooo..curries. Then we had Christmas... more cookies, the turkey, puddings....(*snap*...that's the zip on my pants giving way)....and without skipping a beat, Chinese New Year.....lagi more cookies, yue sang...(*ping*....ouch.. was hit in the eye with a flying button from this girl sitting opposite me at one of my low sang dinners....*smirk*..glad it wasn't me).

Today, as I was sitting down for breakfast at my desk, I looked at what's laid in front of me. A banana cupcake (made a batch last night as the bananas sitting on top of the fridge were nice and ripe) and a cuppa milo. Is this really the start of the "dry season" already?? 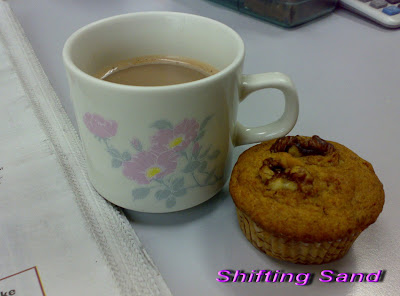 So pathetic of a breakfast
Nah.. shoved that cupcake back in the box. Will bring this up for babe and some of the colleagues later for their tea break. 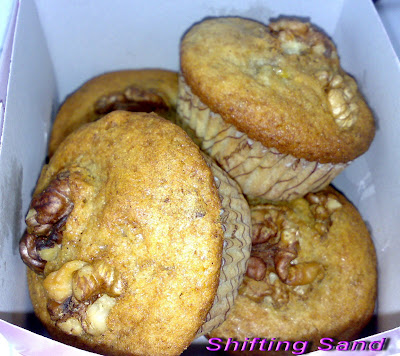 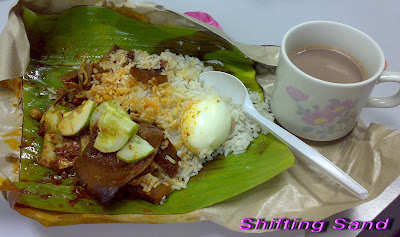 haha.. one banana cupcake sure dont sound like you. the nasi lemake is more like you. I miss nasi lemak. Now a days I am too lazy to go down and buy.

when you know that you are coming down the next day.. lemme know lah.. then i buy nasi lemak from that stall and you can take it back for tea time or lunch :)

hehehehe... wooohoooo thanks so much for the cuppycakes.. looks so much better than mine cos got whole walnut on top :P i was just too lazy

Wahhhhhhhh...we were thinking also...one cupcake and milo for breakfast? So kesian..Mana tau actually got Nasi lemak to feast on..Hehe... :p

babe : u r welcome.. yes.but some of the walnuts accident case liow when i dropped the bag yesterday..opps..

superheroes : shouldn't have posted the nasi lemak.. then maybe people belanja me later hor...maybe my superheroes take me to KFC for breakfast leh heehee

Actually, everyday is the season of eating!!!

No one said that you can't indulge after 15 days of Chinese New Year...

kljs : i agree with you totally kenny..everyday is an "eating" day :D