House Cleaning for the Body

I was so very sick yesterday.. so sick that I was not even able to post anything on my blog. I was driving as usual to work and half way, I felt a terrible pain at the abdomen area. It felt like an incoming gastric attack. I immediately tried to reiki myself. The pain did subside a little but it soon came back even stronger. I was not sure if it was just because I was terribly hungry but it could not have been that as I had fried bee hoon and cake last evening for dinner and supper :). If anything, it would have been overeating :p.

Anyways, I got into the car park of my office, the pain had seemed to have gotten a whole lot worse. I was breaking out in cold sweat and my goosebumps have all come up. It was 8am in the morning. Too early for me to run over to the office clinic. So, I went up to the office. Luckily I did as just as I sat down on my chair, I had to quickly get up to run to the office. That was when the first bout of purging, up and down started. By the time it was 9am, I must have worn down the carpet from my seat to the toilet. Lost count the number of times I had to go. Some times, I did not even make it back to my seat when I had to go again ... sigh....

Dragged myself across to the office clinic, got me some medicine and an MC. Got home and slept almost from the time I got home until 8pm in the night. Must have been the medication.

Well, today, got up... as right as rain haha.. but decided to take it a bit easy. Cooked porridge to eat for breakfast. What to eat for lunch.....see, I must be so much better now.. coz all I could think of is FOOD!!.

I think I will cook wanton mee with porky wanton. I cooked this during the Thaipusam holiday. Still have 2 lumps of wanton noodles in the fridge but no more porky for the wanton...Oh nevermind... have to start slow... after yesterday's spring cleaning. 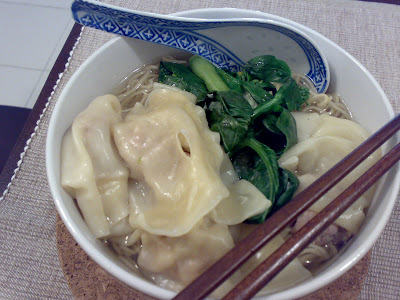 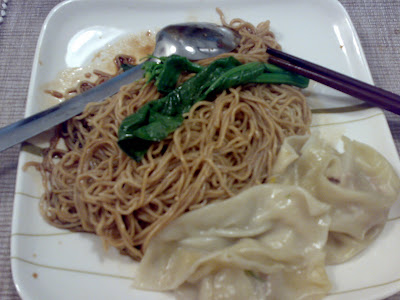 so poor thing but since u r oredi eating "well" i guess u must hv been so much better by now kekeke. lemme know when u come in, i got some goodies for u :D

kljs : heehee..yeah lor.. how did you guess? no more black sauce left...onto my last drop :)

babe : oh yeah.. eating pretty well already.. the gastric, diahhroea and vomiting.. already a thing of the past heehee

Poor thing, weekend only want to get sick! Hai....never mind. At least you got an MC eh. Can rest. Hope you're feeling much better now, Y.. :)

i am much much better liow dear superheroes.. thank you for your concern.. hugz!