Yesterday was not that a great a day for me... on the road that is. I think I've had this conversation before with a friend on the internet and we ended up pretty upset with each other. I was complaining about how irresponsible motor bikers were on the road, weaving in and out. He owns a car and also rides a bike and he was arguing that car drivers were worse. But what happened yesterday really proved me right :(

Morning jams are a norm anywhere in Kuala Lumpur and the bikers normally in their hurry to get to their destinations will weave in and out plus "eat" into the opposite side of the road. Yesterday morning, during the crawl to work, my car was stationery. Suddenly I heard a "bang" and felt my car jerk. Looked at the rear view mirror and saw this bike stuck between the right side of my car (boot area) and the car on my right. The bike's 2 side mirrors were caught and the biker's poor passenger behind him probably got jerked off his seat or maybe he jumped off seeing what a tight squeeze they were heading for. The cars were not moving, so we were not able to do anything to get him out of his tight predicament. Both the biker and his passenger had to pull the bike back to dislodge it and moved on their way, weaving in and out again once they passed my car. When I got to the office, checked my car, there was a very minor dent near the side :(

In the evening, the jam back is even worse and going back after 8pm or 9pm does not really make a difference in the inner city. I was driving along Jalan Tun Ismail. The traffic lights in front of me was green but as it was a yellow box in front of me, I waited for the car after the lights to move on before I proceeded. There was a policeman at the side of the road and I didn't want to be summoned for "standing" in the yellow box. As the car in front of me moved, I checked the traffic lights. Still green on my side. So, I moved and in a split second.. WHAM!!

Slammed on my brakes on reflex. A biker beating the red light hit me on my right front skirting. I saw his female "tudung" passenger slipping off the bike but managed to steady herself by gripping on his shirt. We were in the middle of traffic and I really didn't bother to stop to check the car as I know for sure the biker will not admit his fault or pay damages. True enough, the biker and his passenger rode off and I knew the policeman saw the incident but he didn't move a muscle. Nothing much he could do either.

When I got home, I checked my car...sob...money out of the pocket soon to repaint the skirting... 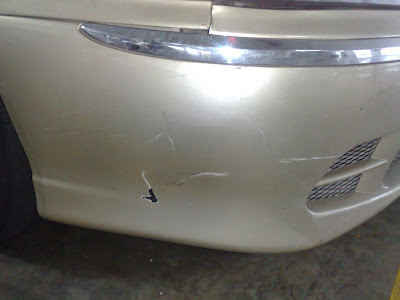 Darn those reckless motorcyclists. Sometimes they think they own the road or sth. We feel so sorry for you and your car. Thank god both unfortunate events did not cause major damages to your car. But we know it must've ruined your mood entirely rite. Cheer up ya! *smile....* :p

the EXACT thing happened to me in November!!! And the "injury" to my car was more or less the same thing that's in that picture u posted...

twosuperheroes.. thanks for cheering me up. today's breakfast and lunch with my pals already made me forget yesterday's nasty incidents liow :p. Lagi.. one more day .. then it is weekend again.. that sure helps :)

kav.. sorry to hear that you had the same thing happen to you.. yeah..driving or crossing the roads in KL is full of danger....especially from these bikers :(

oh dear, you din tell me one when i saw you?? lucky it was pretty minor and not life threatening for either party.

eh is this part of purification process ka?? hehehe at least not as siong as kk's!

haha..babe.. the food made me forget all about the nasty incidents. Not sure if that was purification but definitely idiotic bikers for sure :p

Yalloh! Biker sometime really terrible! Buy ur car no tonight! If 'kena' big u can even change the whole car! Have a nice day!

hi ang moh.. yeah hor.. must buy and if kena.. i wont buy new car.. i will treat all my blogger friends..and you are definitely one of them :)

sorry to hear abt your car. haha.. one of the problem of driving in KL. My car also have alot of dent in it. Had a accident with bus just abt a month after i got the car.. stupid bus... cut into my lane..

Yah lor.. it is nowdays drive at your own risk. No point worrying too much about it lor.. else you might as well take the public transport :(. Hey.. made cheesecake wor!