I believe that practice does make perfect. Especially in baking or cooking. A very long time ago, I remember making a non-bake cheese cake and it was not too difficult. I also remembered that I didn't know all that I know now (which is also not a lot :p), the cheesecake didn't not really turn out that well.

I made my second attempt last week. This time, I almost followed the instructions to the letter except for the pan size. Had only a smaller pan than that indicated in the recipe book. Did the base of the cheesecake on Saturday and the cheesecake filling on Sunday. Towards the end, I slipped again. I did not wait for the cheese to set before I placed the peaches on top of the cake. The peaches sank faster that the Titanic. It was an absolutely horrible feeling, watching them sink :(. 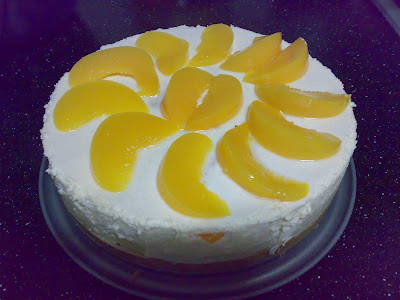 Had no heart to take the picture of the peaches sinking... only took this after the sinking stopped
Anyway, what to do with such an awful cheesecake leh? Stick it back inside the fridge to harden it. Next morning, lay some more peaches on top of the cake, cut extremely thick slices of it and shoved them down the throats of some of my test bunnies. 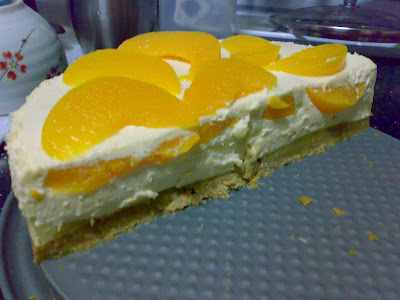 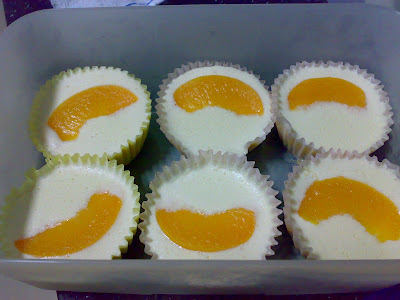 Extras since I had a smaller cheesecake pan than that recommended in the recipe
Thank God the test bunnies are still all alive and kicking today.

But when you got it right, invite me for dinner! I love cheesecake so much!

wahh i still remember how yummy the long ago cheesecake was. i wonder if u could find the recipe before this sat hehehe

hey Y, not a bad attempt what..maybe just need to experiment a few more times. At least it looks like a cake and not something else! Haha.. :p

hafiz : ya lor.. i think so too.. sure looks nowhere near a cheesecake :(

jw & babe : donno where the recipe is liow..so many years ago..i have no idea where to look lah ???

superheroes : haha..thank you for being so nice and polite..but hafiz said it dun look like a cheesecake leh :(.. nvm..will try again someday soon

Look yummy to me! How I wish I leave next to u! I don't mind testing ur cooking or backing!
Have a nice day & happy CNY!!!

kljs : haha..my friend.. you sure or not wor.. my test bunnies never put in their comments.. must have been a god-awful cheesecake :)

hor ny ang moh : it would be my pleasure to have you as one of my test rabbit...nvm..if you ever come this way.. buzz be in advance..then i will cook something for you to test :).. A wonderful CNY to you dear friend hugz!

You didn't say if the test bunnies at your office had survived the cheesecake ordeal. Did they survive?

quickening : hi there..i think the test bunnies could still be alive.. at least one of them coz I just saw him at lunch time :D

bee nee : okie..will take your advice..will blindfold the test bunnies next time heehee..thank you for dropping in