A Variety Show - for charity 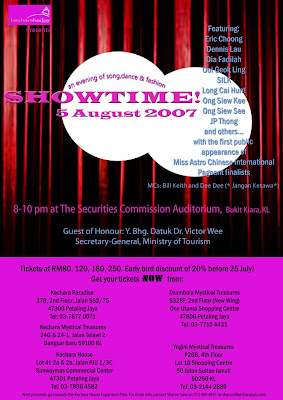 How about doing a good deed? There will be a charity variety show at the Securities Commission Auditorium on the 5th of August (Sunday) at 8pm. Many talents will be performing and there will be a fashion show thrown in. For those who likes leng luis, this will also be the first public appearance of the Miss Astro Chinese International Pagent 2007 finalists.

The evening will be hosted by Bill Keith, the fashion designer and Dee Dee, from the popular TV show “Jangan Ketawa” fame. Part of the variety show will also be filmed and broadcasted on Wah Lai Toi Channel on Astro. The Secretary General of the Ministry of Tourism, Datuk Dr. Victor Wee will be the guest of honour for the night.

This charity show is to raise funds for a new extension for Kechara Buddhist Centre, which will house a multi-purpose hall, several chapels, a library and retreat rooms. The variety show will be in aid of this new extension as well as other projects being run concurrently by the centre, including a program to help the homeless and setting up a shelter and provide training for them in order to give them a long term solution.

Tickets are available at RM80, 120, 180 and 250 and there is an early bird discount of 20% for purchases before 25 July. They are also seeking sponsors for the event, with Silver Sponsors at RM2000 and above, which entitles the sponsor to have their logo in the program and two seats at RM250. Gold sponsors at RM5000 and above entitles the sponsor to the above privileges as well as their logo on the backdrop of the stage.

Tickets are available at Kechara House and outlets or you can just mail me.
Posted by Unknown at Thursday, July 19, 2007