So pumped up with drugs that I feel I can fly…..

After some marathon movie sessions from Thursday right up to Sunday morning, I think my body has had enough of bashing. Coupled with the fact that on I was having lunch with a colleague on Thursday, who was practically coughing over my food and drink and sitting next to a lady on Friday nite’s puja who was coughing from start to end (when I meant start to end, it was from 8pm to almost midnite, poor dear), my immunity just could not stand up against the barrage of attack from the germs…. Arrrrggghhh.. I was down on Sunday evening. There goes my plans for another movie that evening.

I have about 8 packets for drugs in my bag now. Have completed the course of antibiotics but still coughing my brains out. Tried to take the little green pill for the cough… no effect. Took some panadols at 9am this morning, the headache did not subside by 10am, so, took another painkiller in. Feeling a bit better but the cough is still there. Tried to cough out the irritant but nothing’s budging. I think I am going to gargle dettol next, if only to stop this *&%$#@ itch (saw that advert on tv where the guy just put his hands inside his throat to scratch it). Wish I could do that now!! 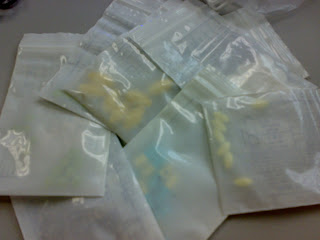 Sigh, not going to go out for lunch coz the weather looks hot and I don’t really think I can take it. Maybe stay in doors and play with my little pills. Ngah.. I’d probably be reading up the other bloggers’ posts. Let’s see what tomorrow brings?

A mail just came in from an ex-Uni mate. Managed a smile on this cough and snot filled day :(

A Man entered a pet shop, wanting to buy a monkey.
The shop owner pointed out three identical monkeys and said, "The
monkey to the left costs 500 dollars."

"Why does that monkey cost so much?" the man wondered.
The owner replied,
"Well, it knows how to use a computer."

The man asked about the next monkey on the perch.
"That one costs 1,000 dollars because it can do everything the other
monkey can do, plus it knows how to use the LINUX operating system."

Naturally, the startled customer asked about the third monkey. "That
one costs 2,000 "

"And what does that one do?" the man asked.

The owner replied, "To be honest, I've never seen him doing
anything, but the other two call him BOSS!"
Posted by Unknown at Wednesday, July 11, 2007

Aloha, try fisherman friends, the original, it works wonders to cure the itch.

Thanks for the suggestion. You think I should change the flavor cos I've been eating the Apple Cinnamon flavored ones.. Still coughing my lungs up :(