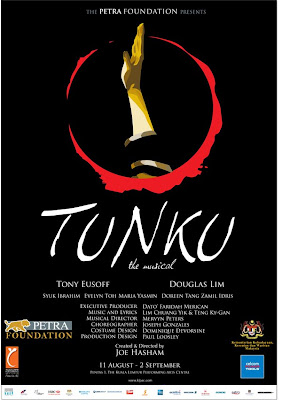 The last roaring cheer died away. A roll of drums, a hard metallic command, and as the strains of the national anthem flooded the stadium the flag of independent Malaya was slowly raised. Exactly as the flag reached the masthead came a crash of the first shot of the 101-gun salute...and so marks the beginning of our 50-year journey."

Created and directed by Joe Hasham and written by the duo who brought you the award-winning Broken Bridges, Lim Chuang Yik and Teng Ky-Gan, TUNKU The Musical has all the colour, drama, excitement, anticipation, heartache, sorrow and uncertainty of that fateful Saturday morning 31st August, 1957. Aptly timed in conjunction with Malaysia's 50th birthday celebration, this is certainly one production not-to-be-missed!

- Enquiries or to purchase tickets for charity night, please call Soroptomist International at 03-2300 1988.