Our Book Club Cell Group “Norgyuma” met up last night to review the latest assignment set by Rinpoche. This round, we were reviewing the documentary “Faces of Death” (1978). I have gotten this synopsis from the internet and it should put the entire deal into its proper perspective.

“A 'mockumentary' hosted by Dr. Francis B. Gross, a coroner. He is trying to show you the different 'faces' of people while dying. There are faked scenes of people getting killed intermixed with footage of real accidents. There are executions by decapitation (in an Arab country) and the electric chair. One scene shows a group of tourists in Egypt smashing a monkey's head while still alive and eating its brains. There are shots of animals eating people and satanic orgies using dead bodies. There is a segment that deals with an alligator that accidentally entered 'residential' waters. The local warden goes in his boat to get the crocodile back into the sea when he accidentally falls over and becomes gator bait. The film ends with news clippings of people jumping off buildings and major accidents". Written by Sujit R. Varma

So, there you go. It was not exactly an after dinner mint that we had yesterday. We watched it together as a group and somehow, having seen it one round by myself, it was not so revolting when I watched it again with others. I must say it was rather amusing to see others cringe and looking nauseated when I was exactly like that, if not worse when I watched it by myself the other night. Maybe it was the mind already knowing what to expect or maybe this was the real me…. one who is able to revel in the gross (the evil me). We discussed the significance of watching the documentary and some of us hope that we will have more awareness toward death now, to realize the certainty of death for all of us, with only the time of death to be decided. For some of us, it could be even untimely, when we walk out of a building and some flower pot falls on our heads. Watching how the animals were slaughtered of coz brought tremendous amount of compassion out of each of us but is that enough? Yeah, sure, if we all started turning into vegetarians, that should serve to at least reduce the number of killings of innocent animals, but what of man killing himself due to his curiosity and thirst in pushing himself to the limit without thoughts of death for himself and the worst kind would be when man raged war against his fellow man. 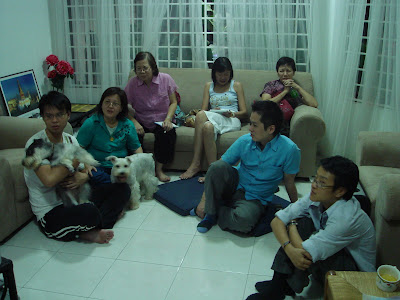 We ended our meeting half an hour before midnight. I am not sure if any of us were really that disturbed by what we saw as we all knew that death is a very natural phenomenon, which follows all births. I know that most of us will now understand why Rinpoche wanted us to meditate on death so that we can understand what we have to do with life. To make the most out of this precious life of ours so that when death occurs, death can be embraced without fear or regret. OM………
Posted by Unknown at Wednesday, July 04, 2007