I heard of this word last night at the hospital. Apparently osteoarthritis is a condition that affects mostly elderly people. It occurs when the cartilage that surrounds the joint area becomes frayed and in some instances, becomes completely worn away from age, years of use or injury. Without the cartilage, which acts as cushion for the joint, the bones will rub together, causing pain, swelling and possible loss of mobility.

And that was probably what happened to my mum yesterday morning in the hospital. She was checked in the hospital the 3rd time since she was first admitted in August. On Monday, she was admitted for the 3 round of endoscopy to ensure that the bandings have worked and there were no more new lesions. She was scheduled to do it on Tuesday morning but when she woke up in the morning, there was no water at the toilet at her end of the ward. So, she was asked to walk over to the other end of floor. Apparently she could not sleep the night before and having "sea-legs" and coupled with the fact that she has terribly weak knees (have been complaining about knee joints pain since a while back), she fell in the toilet. When my brother arrived at the hospital, he found her bed empty. As he walked out of her ward, found her hobbling back with blood streaming out of her face. Man, that really gave him a fright. SMSed me and the other brother. My 2nd brother went to see mum at the hospital during lunch. I was stuck at work :(

Apparently osteoarthritis is common among older people, it does not discriminate of age groups, sex and geographic areas. Regular symptoms of osteoarthritis includes the following:-


The usual treatment for osteoarthritis normally involves therapy to strengthen the muscles through exercise, application of hot and cold compresses on the painful join, oral medications, use of supportive devices such as crutches and weight controls.

Surgery, such as joint replacement surgery or arthroplasty, can be an option to consider for those experiencing severe pain, joint damange and very limited mobility.

However, I am likely to start mum on an alternative therapy, which includes chiropractic therapy and vitamins such as C and E and also glucosamine. According to a friend of mine, glucosamine is a nutritional building block required in the formation and repair of cartilage. Although naturally occurring, the level of glucosamine production in the body decreases with age. The higher the level of glucosamine, the faster the rate of cartilage formation. Studies have shown that glucosamine was able to provide pain relief similar to that of non-steroidal anti-inflammatory drugs like ibuprofen and aspirin for people with mild to moderate oeteoarthritis.

Glucosamine is extracted from crustacean shells like crab, lobster and shrimp. Read more at wiki. But there is also glucosamine to avoid. Read more here. Meanwhile, I will check with the nutritionist at the hospital for more information. If you need more information on this, let me know. 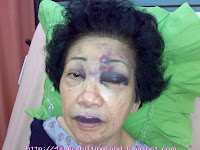 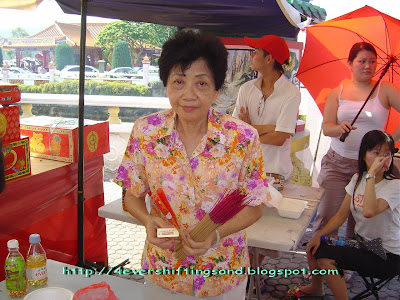 Mum before her fall and yesterday after her fall at the hospital.

btw this was wat my MIL is having that she had to do her hip replacement.

supes : thank you. luckily most of her bruises are superficial. the doc did scans and other stuff and told us that there was no concussion.. phew!

babe: thank you too. is this what you told me sulyn is also having ah? if it is then osteoporosis is not only an "old" person's problem then.

That's a pretty bad fall. Hope your mom will get better fast fast.

Gosh!! Hope your mom gets better.

I suffer from a pretty bad knee and have been advised to take glucosamine. And I found out that there are a few types that we should avoid, especially those with salts.

thank you che-cheh and angie for your concern and well wishes. will take note and ask around more about the glucosamine. just saw an advertisement today in the Sunday Star on glucosamine

i used to take glucosamine for three months. i dont live with pain any more except occasionally now. but i have stopped taking it as i dont want to b chemically dependent on it

hi Bengbeng. Thank you and my mum is recovering now from her facial injuries. wow.. looks like glucosamine did help but i agree with you, one must be very careful not to be dependent on the drug.