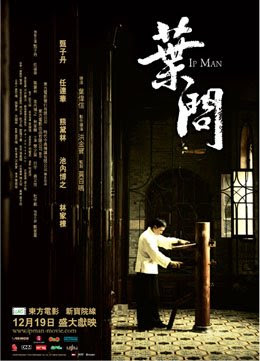 When I was at the cinema recently watching that terrible "Quarantine" movie, I saw this poster at the foyer which read "Ip Man".. and being the banana person that I am, I pronounced it as I read it.."Ip Man" and I could not have been more wrong. The trailer of the movie was shown and only then I said to myself "Hey, I know this person. He is the Wing Chun Master of Bruce Lee and his name is actually pronounced as Yip Mun.. and not Ip Man.. bah!".

The trailer that was show in the cinema

Went to surf around the net to find out more information and there are a lot of things written about Ip Man and Wing Chun on the internet. Apart from checking Wikipedia, I also found these few interesting websites.

This is the official ipman movie website. The loading of the site after you have selected the language preference is great.. especially if you have a slower line. You might be able to learn some moves from that little cartoon man whilst the page is loading up :D. Cool page when it eventually got loaded up on my PC.

Then there is the WingChunNews. com site which is apparently the site to be at if you are looking of news, happenings, announcements in the Wing Chun World. This is extracted from WingChunNews page.

Founded by Yim Wing-chun; took root in the hands of Leung Chun; blossomed under Ip Man…’ Ip Man is adapted from the life story of Ip Man, the grand master of the Wing Chun style of kung fu and sifu (master) of legendary kung fu superstar Bruce Lee.


Wing Chun has a history of more than 200 years. It was founded by Yim Wing Chun, took root in the hands of Leung Chun, and prospered with Ip Man. The art of Wing Chun has now become very popular with martial arts enthusiasts, especially overseas. It is a traditional Chinese martial art with a formidable reputation internationally.


Wing Chun Kuen is characterised by close body combat, requiring practitioners to show speed and power. Its Chi Sao or “sticking hands” is more similar to modern day combat skills and has a rich feel of genuine strikes. This is also why Ip Man differs from the dazzingly romantic and purely fictional style of previous martial art movies. Its explosive punches and aggressive close-range combat offer a new thrill never experienced by modern day audiences.


The story of Wing Chun began in the 1920s and 30s, in wartorn China. Ip Man was martial art’s unyielding follower, devoted whole-heartedly to the free learning of wushu. The fight to be top between the Wushu schools in the southern and northern regions of China had not stopped him having goodwill matches with other practitioners. Nationalistic bad feelings and racial hatred had not lessened his respect for Japanese kung fu warriors. In this great era of hatreds and tragedies, Ip focused only on wushu. His enthusiasm for martial arts saw him having devastating street fights with various elite practitioners.


To date, there have neither been movies nor publications about Ip Man. This movie will be the first important record of the master’s life. Ip’s persistent devotion to Wing Chun is a classic example of the love and respect shown to wushu and the freedom and spirit it represents. This movie will see the making of a modern wushu master representative of Chinese people worldwide. Ip Man is a concept, a spirit, a way of thinking – and it represents a new peak in Hong Kong’s wushu movies.

This is the Promo Video which is slightly longer than the Trailer.

I also found this short little video with some stills of the real man Ip Mun.. not Donnie Yen.

This is a movie worth watching... Better than the Jackie Chan/Jet Li disaster of a movie shown earlier this year.

Hi Angie.. yeah.. I watched that one in the cinema.. slept through most of it.. zzzzz... super boring...

You are not the only one, I pronounced it as I.P Man too. And by the way, thanks for the great analysis and all the clips.

Ya! I'm waiting for the show too. Yip man's later lineage like Yip Chun will be so glad to see his forefathers being shown on the screen. We can even see all the beautiful techniques like the six and the half point staff, sticky hands and also the powerful one inch punch. Hooray!!
They pick the right actor to do it. His love , respect and interest in martial art will let him master it quick. Looking at his practise with yip chun you know he have absorbed it smoothly due to his deep roots and many years of background in the chinese martial arts.
As like all chinese five arts years of experieiced is critical!!!!

Annon: you really do know a lot about this subject. Too bad you chose to remain annon.. i think there will be lots of people who would want you to share more. but thanks for dropping in and leaving a comment. Did you leave the YouTube's link too?

good day people. I'm honestly into shoes and I was looking as far as something that particular make. The prices due to the fact that the shoes are around 350 bucks on every page. But definitively I set this site selling them for the benefit of half price. I really like those [url=http://www.shoesempire.com]prada sneakers[/url]. I will absolutely purchase these. what do you think?

good evening bros. I'm actually into shoes and I had been digging for that exact make. The prices for the sneakers are about 300 pounds on every site. But finally I set this area selling them for half price. I absolutely like these [url=http://www.shoesempire.com]gucci sneakers[/url]. I will absolutely purchase these. what do you think?

good morning everyone. I'm honestly into shoes and I was digging for that exact make. The prices seeking the shoes are around 210 pounds on every site. But definitively I set this area selling them as a remedy for half price. I really love those [url=http://www.shoesempire.com]gucci sneakers[/url]. I will definetly buy those. what do you think?

good day ppl. I'm honestly into shoes and I was looking for the sake of that exact make. The prices due to the fact that the velcros are all over 350 pounds everwhere. But completely I set this area selling them someone is concerned half price. I exceptionally want those [url=http://www.shoesempire.com]gucci sneakers[/url]. I will absolutely buy them. what do you think?