Mum's in the Hospital

I have not posted for almost a week. I was actually away from office since last Wednesday, on a long awaited time-out away from work. I was outstation for several days and Monday was supposed to be my first day at work and all things routine.. which included blogging. But at 12:30am on Monday morning, my mum complained that she didn’t well at all, in fact she was feeling rather nauseous. Went to the toilet and in a minute, she found herself retching out blood. Fresh blood. The second bout of retching came at 1:30am but this time, the blood has started to clot. Initially she didn’t want to let us know as she thought that she’ll wait until morning but I think the discomfort was too great and it must have been rather unnerving to be retching blood. She finally told us at about 3:30am in the morning and immediately we rushed her to the Emergency Ward at ) in Petaling Jaya.

Once we arrived at the hospital, she was feeling slightly woozy, since she did throw up quire a fair bit of blood. She was immediately placed in a wheel chair and was wheeled into the ER. The nurse there took her blood pressure and heartbeat and I think her blood pressure did appear low. They placed her onto a bed and we waited for the medical assistant to arrive. After asking and much prodding, they threaded her with tubes all over, up her two arms, in the back of her left hand, up her nose.

The service there was quite satisfactory and nobody asked us to pay any money upfront or check our ability to pay. Their immediate objective was to do all that was necessary to find the cause of my mum’s bleeding. Apparently, she was already bleeding a fair bit as her stools had turned black (a sign of internal bleeding) at the same time she started vomiting earlier.

However, at 4am in the morning, perhaps there were insufficient staffs as we found our mum on her bed in the middle of the hallway. We left her in the emergency ward to rest and when we returned after 5 minutes, we found that her bed was not there. When we asked the nurse, she informed us that mum has been wheeled in for an Xray. Later, we found her in the bed in the middle of the hallway. Apparently she has finished the Xray and the Xray staff just pushed her out from the Xray room as it was the nurse’s duty to wheel her back into the Emergency Ward. In the end, my brother and I wheeled her back.

Anyway, today is already Wednesday. Mum has been in there for 2 ½ days and has been pricked, prodded and went through 2 rounds of endoscopies and what I believed was endoscopic clippings. The doctor tried to make the explanations as layman as possible to us when he told us that he was going to place some rubber bands in the area where my mum was bleeding. My brother say the little “rubber caps” that was to be inserted into the gut to be placed over the bleeding area. Anyway, I returned to work today and at lunch time, I made some checks on the internet to find out what could possibly be wrong with mum and I found out that what she had could possibly be Obscure Gastrointestinal (GI) bleeding. And the 1st case discussed in that article was like they were describing mum.. a female diabetic, hypertensive patient with a history of a stroke……

I am not sure what could be the exact cause of mum’s bleeding but so far, according to her doctor’s diagnosis, the bleeding could be due to her long term medication, especially the medication for high blood pressure, and her recent muscular discomfort, where she was prescribed pain killers plus the fact that she has recently partaken in fiery meals of chillies and sambal belacans over the weekend could caused the lesions to occur at the gastrointestinal tract. She will have to be in the hospital for several more days for observations and to see if the procedure which they did has stemmed the bleeding. However, mum’s blood pressure has shot up rather alarmingly yesterday. It was 210/90 for at least half a day. The doctor was putting in a series of medication into her last night. This morning, the pressure has come down to 160/80.

One other thing here is that if one craves for unending activities, you will surely get it. Mum is in a ward with 3 other ladies and between the 4 of them, you will have nurses, doctors, medical students, janitors, food caterers and visitors walking in and out of the ward every minute of the day. No wonder mum didn’t seem to be complaining as she has this awful fear of being alone and where she is, you will never have anytime for yourself . 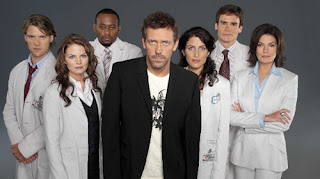 My mum is being taken care of by a Doctor Ng, whom we have never met or spoken to. The only time I have seen him is when he came along on the first morning after mum was admitted with his team of medical students. The team was easily 7 members strong. One of the students, a young Chinese man has been attending my mother since. I do not know his name and when I asked one of my brothers if he knew, my brother said… “Don’t ask for his name… ask for his number”. Ah?? Oh.. HOUSE, the series. Apparently in Season 4 of House, his new batch of interns only have numbers… no names. Trust my brother to try to lighten the tension that we have all been feeling J.

fishman and gargies : thank you for your get well wishes. will be going to visit her after wards.

oh dear, that is quite a series of anxiety. I really hope your mom will be healthy soon. It is rather disconcerting when one found out that one's mom whom always have been thought to be healthy is alarmingly weaker than one thinks.

Oh gosh..hope your mom will recover really soon! And yes, to think your bro can throw in a joke about House in the end is rather...erm...haha..clever. Hopefully things will turn out better soon for you and your family. :)

allthingspurple: yeah.. one always think of one's parents as infallible to any illness. she has also been diagnosed as having Hepatitis C now :(.. hope to see her discharge from the hospital next week. thanks for your well wishes :)

supes: thanks supes..hope the doctor thinks she is well enough to be discharged next week. monitoring her still for the success of the procedure to stem the bleeding.

Sorry to hear about your mom. Hope she'll be well in no time. Take care yourself.

Thank you che-cheh for your kind wishes :)

Sending good wishes to you and your family . Hope she'll get well soon! :)

hi cc..thank you for the wishes. dropped over at your blog and really liked what i found there :). i've added you to my google reader. have a great weekend :)

Hey! Hope your mum recovers soon! Some of the doctors in UH are the best in the country and so are their facilities.

You take care too!

thanks bento pet. i am sure the doctors and their facilities are amongst the best. btw.. thanks for being the silver lining in my cloud .. refer to my latest post in Recipe :)

Actually can you see this from the bazi?

babe: thanks .. i believe that she is better as the doctor allowed her to be discharged. But she is still on porridge diet, to make sure that lesions have time to heal after the clipping.

david: yes.. one can see illnesses in bazi readings and the locality of the affected region. However, it cannot be used to diagnose the exact illness :(

Hey there, just dropping by to see how your mom is getting along now.

YOu take it easy too,yea?

allthingspurple: thank you and my mum is already back home and she is slowing recovering. Still on semi solid food as she has to wait for lesions to heal.

btw, will catch up with you soon as I would like to know if you will allow me to do a simple interview on you later for my personal project.. the topic is related to Bento Bloggers :)

have a good day christene.hugs