The reason why I am blogging this is because of late, many of my friends' family members are having cataract surgeries done..and at the same time, I also noticed that some of them are not as old as I expected them to be. I used to think that only people over the age of 60 or so will be requiring cataract surgeries but these days, people as young as those in their 40s are also requiring them. So I decided to do a bit of research on it.

Oh, by the way, the costs of doing a laser surgery in Kuala Lumpur, Malaysia is between RM3,000 to RM4,500 per eye, depending on the hospital selected and the cost does not include pre and post surgery visitations and medications.

I have found out that there is an eye formula which contains potent antioxidants to protect the tissues of the eyes, promotes blood flow to the eyes which then offers optimal nutrition support for healthy, normal eye function. No doubt this does not guarantee one against the possibility of ever developing cataracts, but if you could slow down the process or for those of us with family members who are diabetic, this option is clearly the best option to possibly prevent deteriorating vision or even blindness. Click here for more details.

What is a Cataract

What are cataracts? Cataracts is the clouding that develops in the crystalline lens of the eye and it varies in degree from slight to complete opacity, thus obstructing the passage of light into our eyes. Normally, early in the development of age-related cataract may cause the increase in the power of the lens, it may cause near-sightedness (myopia) and eventually the gradual yellowing and opacification of the lens. Cataracts typically progress slowly to cause vision loss and potentially blinding, if untreated. 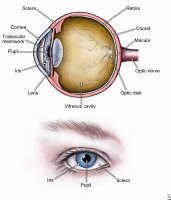 The lens is made mostly of water and protein. Specific proteins within the lens are responsible for maintaining its clarity. Over many years, the structures of these lens proteins are altered, ultimately leading to a gradual clouding of the lens. Rarely, cataracts can present at birth or in early childhood as a result of hereditary enzyme defects, and severe trauma to the eye, eye surgery, or intraocular inflammation can also cause cataracts to occur earlier in life. Other factors that may lead to development of cataracts at an earlier age include excessive ultraviolet-light exposure,diabetes and smoking, or the use of certain medications, such as oral, topical, or inhaled steroids

Cataracts develop from a variety of other reasons as well, including long-term exposure to ultraviolet light, exposure to radiation, secondary effects of diseases such as diabetes, hypertension and advanced age, or trauma (possibly much earlier); they are usually a result of denaturation of lens protein. Genetic factors are often a cause of congenital cataracts and positive family history may also play a role in predisposing someone to cataracts at an earlier age, a phenomenon of "anticipation" in pre-senile cataracts. Cataracts may also be produced by eye injury or physical trauma.

Cataracts are also unusually common in persons exposed to infrared radiation. Exposure to microwave radiation can cause cataracts. Atopic or allergic conditions are also known to quicken the progression of cataracts, especially in children.

Cataracts may be partial or complete, stationary or progressive, hard or soft.

Having cataracts is often compared to looking through a foggy windshield of a car or through the dirty lens of a camera. Cataracts may cause a variety of complaints and visual changes, including blurred vision, difficulty with glare (often with bright sun or automobile headlights while driving at night), dulled color vision, increased nearsightedness accompanied by frequent changes in eyeglass prescription, and occasionally double vision in one eye. Some people notice a phenomenon called "second sight" in which one's reading vision improves as a result of their increased nearsightedness from swelling of the cataract. A change in glasses may help initially once vision begins to change from cataracts; however, as cataracts continue to progress and opacify, vision becomes cloudy and stronger glasses or contact lenses will no longer improve sight.

Cataracts are usually gradual and usually not painful or associated with any eye redness or other symptoms unless they become extremely advanced. Rapid and/or painful changes in vision are suspicious for other eye diseases and should be evaluated by an eye-care professional.

At present, there is no real effective way to prevent the formation of cataracts, so secondary prevention involves controlling other eye diseases that can cause cataracts and minimizing exposure to factors that promote cataracts.

I work in front of the computer for > 10 hrs everyday. Besides wearing UV what-what glasses and taking loads of anti-oxidants, I feel that my eyes will be very tired at the end of the day.

In a span of 1-2 years, 3 of my family members has cataract surgeries. So scary.

Angie: you must really take care of your eyes dear.. as they are the only pair you have :D. I am also taking as very specific eye supplement and that is my little insurance policy. I used to feel terrible by 5pm at the office which at first i blamed it on my eye shadow - running into my eyes ..haha.. but i know it is just stress. Now i also break my time in front of the PC by going to the toilet, the pantry and the photocopy machine (to chit chat..hope my boss does not read this comment :p).

che-cheh: may I know if these family members are all above 60 years old or younger? I think some of the people needing cataract surgeries are getting younger :(

oh.. in that case che-cheh, they are in the correct age group :D.. i heard that people in the 40s are already starting their downhill journey to cataract land liow. now that is scary.

Im writing you in regard to exchanging links with your site and hope you will consider my proposal. I happened to come across your site and I actually
have one that's related to yours and I thought it would be beneficial for us to do a link or blogroll link exchange.

Please let me know if you're interested and I'll put your link up right away.

All I would need to know if your desired link, and anchor text. I will return with my information.

Additionally, I have sites in many categories that we could exchange on.

Thanks you for your time and I truly hope to hear back from you.