Following from the previous post.... yeah..I finally decided to cook it. Was also worried that if I didn't, the soaked pulut (glutinous) rice might ferment and turn into glutinous rice wine..the smelly type.

I used my mum's recipe with some modifications as a particular test bunny didn't like chicken, mushrooms or lap cheong ..sigh.. whatever lah.. anyway, I really had very little time to make the chicken and other stuff that one normally puts on top of a loh mai kai. I started down to work at 11:00pm. First I took soaked rice and put it into a steamer. As the rice was steaming, I soaked some chinese mushrooms in some warm water, to make it soften faster. Cut up some lap cheong (chinese sausage) and took some char siew (bought from this auntie in Petaling Street) and set all this aside.

Made the seasoning for the loh mai kai. By then, the rice was ready to be taken out from the steamer. Poured in the seasoning into the rice and gave it a good mix. Placed the mushrooms, lap cheong and char siew at the bottom of the bowl... oh yeah.. forgot, I also greased the bowls whilst waiting for the rice to steam.

Put in the rice, pat it down and then poured in some water into the bowl of rice and placed the bowls into the steamer. I only made a little this time... about 5 bowls of loh mai kai. Lucky lah.. else I'll be watching the steamer the whole night as it takes about 40 mins or so to steam the loh mai kai. 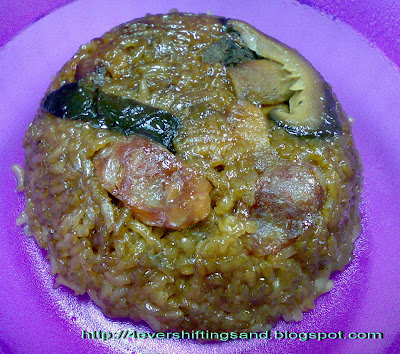 I ate 1 for breakfast, brought 1 for babe and left the other 3 at home. Hope that it is still there when I get back heehee. This is how homemade loh mai kai looks like..... 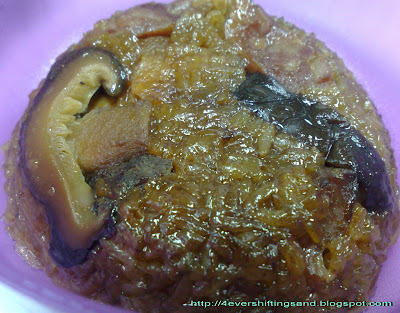 Hey, your lo mai kai looks good! Makes me want to try to make my own too.

test bunny reporting in... nice texture and flavour but not salty enuff. the sexitary test bunny also said not salty enuff and the rice at the bottom not dark as the top (errr i tuang out onto a plate to heat up so we can see the bottom part hehehe).

Hey Y...I like the look of your loh mai kai!! Looks delicious. What did you use for the seasoning??!! Gosh, you are so talented ar. Everything also can make~! haha.. :p

babe: okie..noted. must add the salt. I think the darkness of the rice at the bottom has been diluted when I poured the water in to steam it the second round. How ah?? If I added black sauce.. then it might turn out too black??

Wow yummy Lo Mai Kai.My hub just had one today but errr.. from the kopitiam la. Hey so sorry for the link in my blog. I realized I type her URL wrongly. I have corrected it.

Hey wanna exchange link. I have link urs in mine. Great blog... maybe can exchange recipe ya.

hi suesue..so nice to hear from you :). I've really enjoyed your blogs (yeah, both of them very much). Have learnt a lot from you.

Yeah.. it would be fab to link our blogs..heehee..my recipes ah..mostly really home type lor.. but can can..Have a great week suesue :)

I'm the sort of guy who loves to try fresh stuff. Presently I am fabricating my hold photovoltaic panels. I am making it all by myself without the assistance of my staff. I am utilizing the internet as the only way to acheive this. I encountered a very amazing website that explains how to contruct solar panels and so on. The website explains all the steps involved in solar panel construction.

I'm not exactly sure bout how correct the info given there iz. If some people over here who have experience with these works can have a see and give your feedback in the page it will be great and I would extremely appreciate it, cause I extremely would love to try [URL=http://solar-panel-construction.com]solar panel construction[/URL].

Tnx for reading this. You people are great.