I was chatting with Babe at lunch one day about this absolutely yummy pao (I think it is called Wor Pao) that I use to have many years ago. My late dad buys them from a kopitiam somewhere near Sentul (I think) each time we make a trip to Genting Highlands. The pao is actually a hybrid pao as it has the usual chicken fillings (sang yoke) but topped with a steam cake. Since the development of Sentul area, the kopitiam does not exist anymore.

Babe told me that she has seen another type of hybrid pao where they have the loh mai kai fillings inside a pao. Wow, best of two worlds hor. Anyways, last weekend, as I was at Taman OUG in Old Klang Road getting a special type of dog food for the mutts at home, I passed by a kopitiam which has that pao steamer at the front of the shop. I saw something which almost resembled that sort of pao I was telling Babe. Asked the owner of the kopitiam the name of this pao. But she could only speak Mandarin and being the worse type of banana person, can only understand Cantonese. Could not make out what she said at all. It has char siew (bbq pork) fillings and she claims that the top bit is Malai Kou (which looks like normal steam cake to me). Anyway, got one to see if it tastes ok. Costs RM1.80 for one. 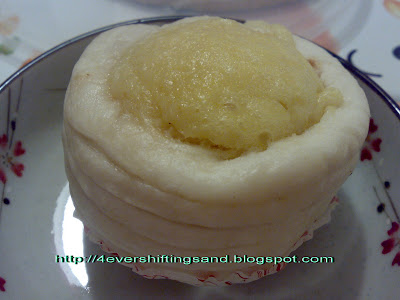 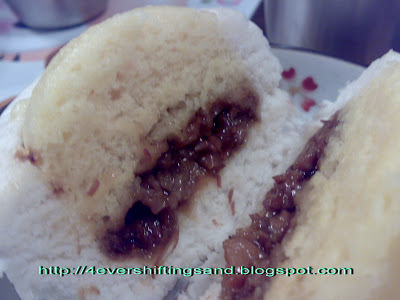 Verdict : Average only. This could be due to the very little char siew filling at the bottom. Ended up only with a mouthful of pao/flour. The original Wor Pao I had was brimming with fillings. So, the search continues for my elusive Wor Pao.

hybrid pao called wor pao? gosh i havent heard of it before =p perhaps because i dont eat pork..hehehe, but it looks really interesting though! i would like to see how that loh mai kai hybrid pao tastes like.. my mom makes halal loh mai kai at home, she is mixed chinese so she can cook some really nice halal chinese food =) halal meaning, everything's the same just no pork =)

sad that you couldnt find your late dad's hybrid pao.. i have a feeling that certain food of the last generation have somewhat disappeared.. unless its been revived by some new kopi tiam place.. hope you find it!

oh yeah,i hate paos that have more pao than the actual filling.. makes me feel kinda ripped off (money wise)

have a nice day darlin

appearance could be better.... but it looks good though....

aisay anti-climax only!!! nevermind... must continue the search hehe

raising mercury: yeah..it is good to have a taste of chinese food (halal) as it adds more variety to your food lists :). i think food and food preferences have changed a lot over time but the best thing about the change is that we are having more "muhibah" type food.. malay, chinese, indian food are now being blended into the cultures of each ethnic group. i see that a lot at our pasar malams, which is good. Have a great week dear Raising Mercury..hugs!!

kljs: kenny, i am sure you will be able to find it soon in Penang coz i have a feeling that all paos and loh mai kais all come from some factory somewhere in malaysia... coz they are sooooo standard these days, in look and feel :)

what about the big kind of pau?

twosuperheroes: ya lor.. little fillings is terrible coz all you eat is flour..yucks!

kljs: heehee...big kind of pau we have here in KL but they are not hybrids.. they are just giant-assed pau.. we call them Yip Chee Mei pau (after an actress from Hong Kong who is very well endowed) and I think in Bukit Mertajam, they call it Lorry Pau.. coz lots of lorry drivers eat them as they are big and very filling :D