One day, before JW left for Greener Pastures Sdn Bhd, she asked me out of the blue... "Do you have an apple corer at home?". Hah? What's that? Then she started to describe this thingamajig she saw whilst she was walking around one of our favorite places IKEA. I was listening rather half heartedly as whatever it was, it didn't really sound that exciting.

A few days later, she bought one and gave it to me. 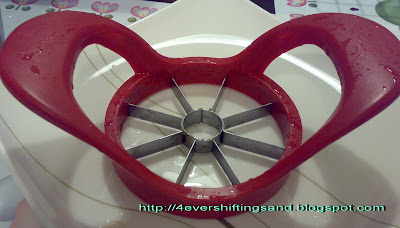 First look.. mmm.. a cross between a frisbee and a plastic space ship. Thanked her for it and brought it back. Didn't use it immediately as I had no apples at home. Don't believe it would work on an orange though, else it won't be called an apple corer would it :).

Decided to test it last week, finally ... and wallah..it is so easy to use... and also it saves the hassle of having a piece of apple looking bigger than the next...you know how little children can be...especially my niece and her brother.... sometimes you think you'll need to bring the scale out to weigh all the food up so that there is no fighting over who's piece is bigger. 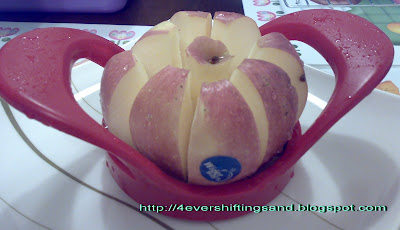 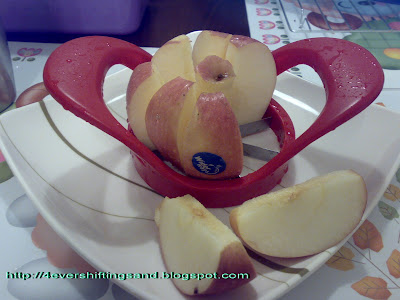 I am not sure the exact price of this gadget but I think JW mentioned that it costs below RM10. Great piece of kitchen tool..... and no batteries REQUIRED :)

Will definitely get this from IKEA. Now I'm sure there won't be anymore whining from Superhero W about cutting apples...ehhehe...cos we'll both be fighting to "cut" the apples! :p

haha..yeah lor.. and if you cannot finish all the apples you've cut..make apple pie yeah..and belanja me :)

i hesitated to buy cos i dunno if its sharp or not :P maybe i shld check it out one day

it is actually quite effective.. but then.. not sure if it will go blunt in time to come.. so far so good...

Looks good. Will get one for myself too.

In any case, I sort of expecting at the beginning that it would peel off the skin too! sigh.. disapppointed, no less, I would still get one anyway since it's so cheap.

Wah tat good ah this thing. Must go Ikea and get it leh.

gargies : haha.. be great if it did peel the skin..but never mind..skin is good.. provided you managed to get rid of the wax

suesue : I hope you and gargies will be able to find them coz i got this round about Christmas time last year.. good luck..don't want you to go all the way there and "No Stock".

Lol.
This product is so creative.
Where can i get one?

hi JJzai.. at the moment, I know that it was bought at Ikea..and I have not seen it sold anywhere else... I could be wrong though :)