What a Huge A*S Fish

One of my regular hypermarkets is Carrefour, especially the one in MidValley. I like going there on Saturday mornings as they open early and I prefer going in before the crowd starts building up. On top of that, McD's just next to one of Carrefour's entrances...what better way than to start the morning with a great McD's breafast set...hor Superheroes :).

Anyway, as I walked in after a wonderful breakfast, the first section I went to was the bread section. Walking past it, what appeared in front of me was the biggest fish I've ever seen in any supermarket or hypermarket. I mean..yeah, I've seen it in the aquariums, in the movies but never in a supermarket. Just had to take a snapshot of it. 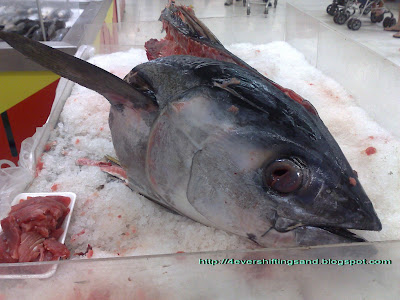 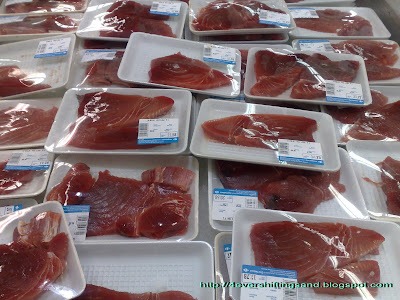 What eventually became of the poor fish
It is actually a Tuna...wow..but despite it's promotional price, it is still averaging more than RM10 a tray. I did not buy any as I didn't know what to do with it. At the moment, I'll just stick to my bawals and tenggiris :) 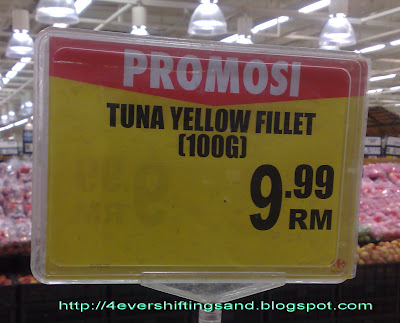 HeeHee..no lah.. not bad influences.. good recommenders...McD must give you some rewards lah :D

ehhh, tuna fish comes in sizes of human weight, as heavy as me leh, or even heavier, so that's really a big ass fish :P

dcyk: your height lets you get away with the meat on you.. you lucky thing you :D

kenny: fish is good.. people has called fish a brain food...now I know why you are so clever...:)