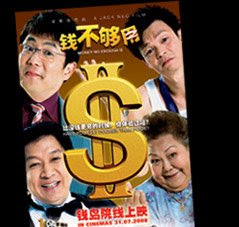 It has been a rather good week for me, despite having so much to do. Decided to go treat myself last night to a movie but the timing was a bit off because as my friend and I finished our dinner, it was already 9:30pm and the only other show available at 9:45pm was this Mandarin movie "Money No Enough 2". I think it was 10 years ago when I watched the 1st show, "Money No Enough". Back then, I had to read the subtitles all the way as I cannot understand any other Chinese dialect except Cantonese. Anyway, 10 years on, I found out I still had to read the subtitles throughout the entire show :(. But I think the few Malay girls in a few rows in front were probably also reading the subtitles. But I could be wrong as I know some Malay neighbors whose children are schooled in Chinese schools and coming top 3 in class every year - so shy to call myself Chinese sometimes :(

Jack Neo's film has always appeal to me because the story comes from the heart. This one again talks about human traits and relationships. As I was watching the going ons in the show and reading the subtitles, many emotions came up very strongly. First the feeling of sadness, then rib tickling laughter, then tears....wow.. what an emotional rollercoaster. I am not sure if you will get the same effect if you were watching it on a DVD at home, but last night, I knew the people in the cinema were all on this emotional rollercoaster ride with me. The laughter was obvious but when the tears came, I heard sniffles and there was this guy who kept saying "F@*k".. mmm.. trying to cover up the tears??.

I would say, go watch this show. It was anytime better than some of the previous brain numbing snorables I've watched in the recent past.

Synopsis :
Ten-years since the first Money No Enough, local celebrity auteur Jack Neo’s “Money No Enough 2” returns to bring attention to the common man’s life in Singapore where the pursuit of money is a never ending passion .

The story revolves around three brothers from a middle-income background in contemporary Singapore. These are characters who are representative of the business owners, white and blue collar workers of Singaporeans.

The oldest brother Yang Bao Hui (by Henry Thia) represents the lower income group. As a child, Hui left school at an early age to earn money to help support his poverty stricken family. He has been working as a delivery man in the same company for the last 30 years. At the persuasion of his younger brother, he strikes out as an entrepreneur to sell health supplements. As business improves, he quits his dead-end job and puts all his time into the business. Unfortunately the business is forced to a standstill when the health supplement is deemed unsafe for public consumption, which inadvertently brings Bao Hui close to financial ruin.

The second brother Yang Bao Qiang (by Jack Neo) portrays a well-heeled successful businesman. As the owner of his own business, he and his wife flaunts their wealth in typical Singaporean fashion, with designer clothes, a flashy car and a big house to put it all in. However in a moment of greed, he allows himself to be cheated out of his fortune and gets into a very difficult financial situation.

The youngest brother Yang Bao Huang (by Mark Lee) represents the ordinary middle working class. He earns a good salary working as a regional supervisor for a health supplement trading company, and spends lavishly to maintain his ‘wannabe’ lifestyle. When the health supplement business goes bust, debts pile up and Bao Huang too, faces financial ruin.