I met up with an ex-colleague for lunch a few days ago and he asked if I was interested to go to a Diet and Beauty Fair. Ha Ha.. I am sure many women (probably some men too) are interested in anything to do with diet and beauty... maybe not all.. but many, mua included. This fair will be held at the Mid Valley Exhibition Centre next weekend, starting from the 26th September until the 28th. As we were eating and talking, he also shared that his company will be having a booth at the fair and asked if I was willing to part with RM10 for a full face product trial. Mmmm??? What full face product trial? That was when he fished out his product flyer. I think most of you would have heard of this thing called Galvanic Spa. 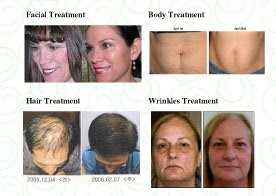 As I was looking at the brochure, I must say I was pretty impressed about some of the pictures. But being rather skeptical, I was already wondering if these were just photoshopped pictures. That was when he did a 6 minutes demonstration on the back of my right hand. As I used to golf, I have always been rather embarrassed by the fact that my right hand is of a darker shade than my left hand. Why? Cause when I golf, I only wear a left glove (for better grip).

When he was done, I noticed a stark difference in the shade of color on the back of my right hand. WAH! Impressed lah. Then he asked if I wanted to have a demo on my face. But only 1/2 the face, so that I can see the difference. WHAT! Crazy ah... in the middle of an eatery and having to go back to the office after lunch. What would my colleagues say? What would my boss say? No lah, I told him. Next time.

I would have liked for him to do the demo on my face this weekend but he will be traveling *sigh*. Hence, I am now trying to round up some of my gal pals for next week to do the demo. No exactly sure which date to pick yet. But for those of you who are interested, just drop me a comment.

I have found this video on YouTube. Actually there are a few more, but some of them talk and talk .. not much action BAH!

I have appended a flayer with the information regarding the 2008 Diet and Beauty Fair at Mid Valley. If you are there, for whatever reasons, do drop in. He told me that there mystery gifts and promotions. I am sure there are plenty of freebies too from the other booths :D. I am going to bring my big Jusco RM4.90 bag to collect the freebies....heehee..damn "tham sum"...greedy. 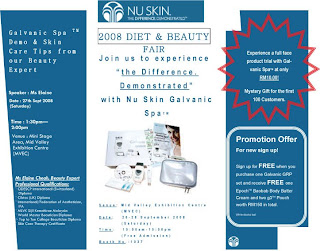 Hahaha....free things always attract people:)
Have fun, will wait to read about it in your blog!~

Okie dokie.. will definitely go to the exhibition and collect the freebies heehee. have a great weekend christy :D