Cosplay, which is shortform for Costume Play is rather interesting. I am told that it is really a performance art, where people dress up, complete with accessories and makeup and clothes, to portray a character from medias, which includes manga, anime, video games, etc etc.

In the begining, I was only familiar with Manga and Anime. That is why I love going to visit Kenny's blog. Codename: Dreams. Over the past month, I have learnt quite a lot manga and anime characters from his blog. It was Miow who introduced me to Cosplay. The first time was venturing into a shop called iSock or something like that at Berjaya Times Square. That is where I learned about the Lolitas and her friends. Some of the costumes were nice and sexy. Others were really wierd, dark and scary. 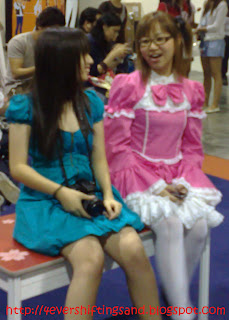 Anyway, I was at MidValley Mega Mall on Saturday and Sunday, helping out my friend at his booth in the 2008 Diet and Beauty Exhibition. By the end of the first day, as I was about to leave the exhibition center, I saw this one fella walking towards the other exhibition hall.

He looked suspiciously like one of those characters I saw on the Anime channel on Astro. So, I followed him in to the next hall and wow.. there was a whole bunch of them. They were really out of this world. I guess you either like them or you don't. I find them fascinating. To actually take the effort to dress up, complete with makeup and accessory, guys and girls alike.

As I was rushing to get back as my legs were killing me, I could only stay to snap shots of a few of them. As I left the hall, there were still several trouping in. They did not have their make-up on yet, so, I didn't bother to take their photos.

The crowd contrast was so obvious. This hall were filled with the young people. I think the average age must be around 20 years old to 22 years old.

In the other hall where the Diet and Beauty exhibition was being held, I think the average age would have to be around 35 years and definitely more.

When I went back to the exhibition halls this morning, I made sure I stood around Hall 1.... where the young people were... haha.. even though I am old in face, I am still young at heart. 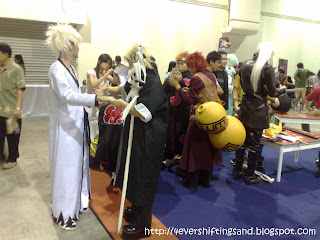 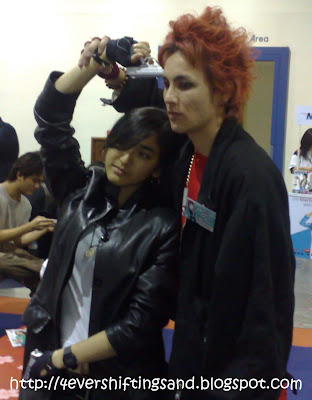 To escape reality to a world of fantasy. Fascinating!

good morning cc. yup, each of us need that escapism every now and them. In the past, we just escape into our dreams but now, we can act it out too.. how cool hor :D

Cosplaying does not always constitute escape reality to a world of fantasy.

Anyway, cosplaying is also an art. How you can make the costume the same as in the actual anime or you know which character that you can cosplay at. Example : a fat person like me can't possibly dressing up like Luffy. It would be the joke of the One Piece cosplayers. However, if I were to cosplay as Street Fighter's E Honda, then it would fit! :P

hi Kenny.. long time no hear wor? How have you been? Cosplay is really catching on very fast in M'sia. There are shops in Berjaya Times Square and Sunway Pyramid that specializes in the anime costumes and accessories. Really interesting but the Gothic ones are rather creepy though :D