A Weekend of Lessons Learnt

When they say, you never stop learning... boy, I sure did a lot of learning over the weekend. From cooking to small stuff in the house, this weekend was kind of strange for me as it surely didn't start out that way.

Firstly, on Friday night, I was thinking of what to cook for my little niece and nephews when I decided to do some simple pre-mixed muffins. The only problem is that the better oven (when I say better oven, I just meant the one with the fan" was being used for something else, and being very impatient, I decided to take another chance with the old oven without a fan. If you remembered my much earlier blogs about ugly muffins and lack of proper equipment, I chose to not learn my lesson. I made the batch of pre-mix muffin dough, added chopped walnuts and choc chips some more and stuck the load into the old oven. 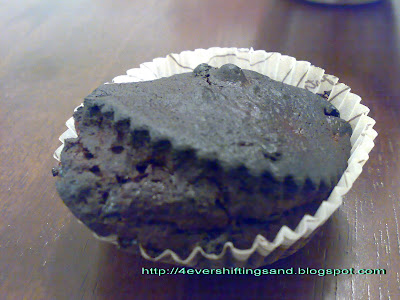 Not to worry, looks can be deceiving....no doubt the muffins were a pain to look at, it was still very yummy... must be the added chopped walnuts and choc chips.

Then came Saturday. One of my brothers absolutely loved Pak Tong Ko, the kind that they sold at the market. Now, very recently, babe has posted in her blog, the recipe for Pak Tong Ko. Now, any normal sane person would have just taken that recipe and go for it. Me, no... I had to simply experiment around (coz cooking and baking is simply another form of having fun and experimenting). Anyways, got this other Pak Tong Ko recipe from a cook book to try. Whilst I was cooking, I knew that something was terribly wrong as it was too easy to be true. Anyways, after it was all done, I put it aside until it was time to take it out from the fridge to be served.

My brother took the first bite and he spat it out (almost instantenously). "What the H*** is that?"... he sputtered. My sister-in-law, a tad more polite said "I think it must be some kind of custard dear". Haha... I tried it.. it was sweet and all... even smells like Pak Tong Ko.. but tastes like GLUE!. My brother told mum that she would now have enough glue for the next few years to used for the altar at home (she has to change the red paper at the altar every year and that needed quite a fair bit of glue and gum).

It does not look that bad but believe me.... it does taste that bad. 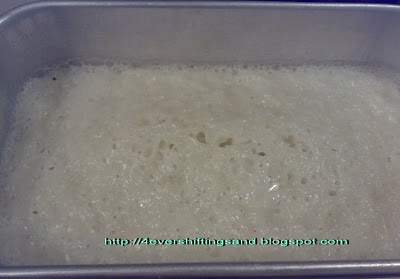 Anyway, on the next day, I decided to do it again, but this time following recipe in Babe's blog. Have a look at how it turned out here :)

The final lesson I had before the weekend was over was never try to do a handyman's work when you have no idea what you are doing.

I normally do all the housework on Sunday mornings and I noticed that one of the toilets always had a puddle of water on the area next to the toilet bowl. Having checked all over, I didn't not really see any dripping pipes except for the one little drop hanging on a pipe going up the sink area. And since the toilet tank has been out of that blue thingy (what do you call that anyways) for a while, I took one out of its pack and dropped it into the tank.

An hour later when I walked into the toilet, the water next to the toilet bowl was blue... Ah ha...thought to myself...now I have located where the leak is coming from. Bent down and found that there was this screw-like thingy at the bottom of the toilet tank that appeared to be loosed. Used my hand to gently press it.... more blue water came out. 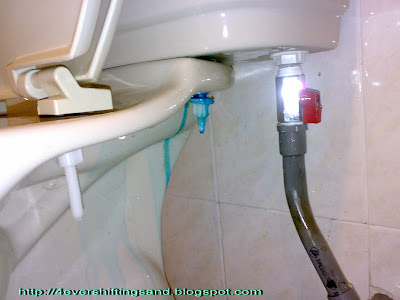 Mmmm....decided to use a little more strength to try to screw the thing back.....wahhhhhhhh.... I created a gushing blue waterwall.... At least I remembered to turn off the water mains in the toilet to prevent the water from overflowing into the bedroom. 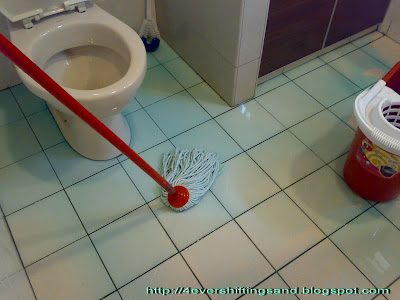 No matter what I did, the screw could not be reattached. Shucks...went to call our friendly plumber for help. He said.. it's weekend and he ain't coming. Just turn off the mains, sit tight and he'll come tomorrow. I asked "What time". He said "Day time lah"....bugger.... So, no choice, took Emergency Leave from work on Monday, stayed the entire day waiting for his royal highness to turn up... which he did..eventually at 4:45pm. Fixed it up in jiffy and gave me the bill for RM100. "What! So much to fix a little white screw". He replied "Cheap already lah... you broke the screw mah..so cannot use already...but I change the other side for you as well, in case you accidentally break the other side another day....lagi, petrol price also high mah.. come to your place also very jam"... "Ok lah...Ok lah".. I said and handed him two RM50.

So, for those who were wondering how come I was not a work or was not blogging yesterday .... I was still contemplating on all my weekend lessons.......

haha... we are not handy ppl. i remember i try to fix the light in the toliet once. same thing.. had to call the electrician.

my father is the best... i remember there was a light that was not working in the house for along time and nobody bother to do anything. One day he came and told us... "I fix the light already." those who know my father is not the most handy man around. Then we ask him "Dad how u fix the light." His reply was I call the electrician. he didn't even attempt it.