It has been a long time since I've been to watch a local production or play or musical or anything for that matter but not due to the lack of them. I am sure you will find that there is quite a selection if you know where to surf. But I am rather selective about what I watch and most of the time, if my friends are in the production, whether as an actor or a music director or the lightning director, whatever lah.. as long as they have a finger or toe in there, I am watching that piece :).

Well, there will be 2 of such that will be coming up just round the corner. And I would like to see if anyone would like to come along and we can make it a eat first and be entertained later night... so how about it ;)

The first one is a 4 short stories production entitled RACE - Empat Cerita Pendek (4 Original Short Plays). The synopsis has been extracted from KLPac's site. The presenters of this are KLPac and Rather Peculiar Theatre. 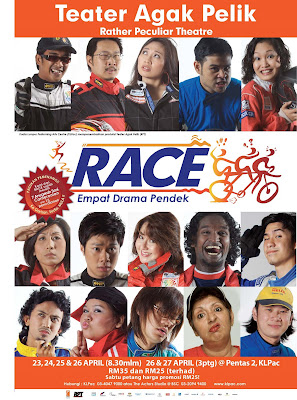 'Race' came about after writers were asked to write/devise a 15-minute piece from the word ‘race’. The results have been wonderful! Playing with the word 'race', four writers came up with four short pieces:

Ridzwan Othman (Winner, Best English Play, BOH Cameronian Arts Awards 2005) tells the parable of a girl, Sarah, playing scrabble in her school. Angsa is not really a comedy, especially for her parents and teacher. Or is it?

Fresh from a South Korean cultural exchange program, Kimmy Kiew seeks new challenge in her devised piece. One In A Billion: the trials of a team desperate to win a billion dollars: in a marching competition. Each participant's predicament is compounded by the lack of a good captain. Sedia! Cepat Berjalan!