Qing Ming Time - Wonder if Dad Gets the Stuff??

It is that time of the year again, Qing Ming (Cheng Beng) festival, which is the Chinese equivalent of the All Souls Day. The actual date is the 4th of April this year and that being a Friday, most of us were not willing to take a day off from work to go visit Dad at Nirvana Memorial Park in Semenyih. So teruk hor? Where is the filial piety? Ha ha.. Dad is very forgiving lah.. what the difference in a day.. anyways, mum says we have 10 days before and 10 days after the 4th of April to make the visit. We decided to do it on the 5th, the day after. 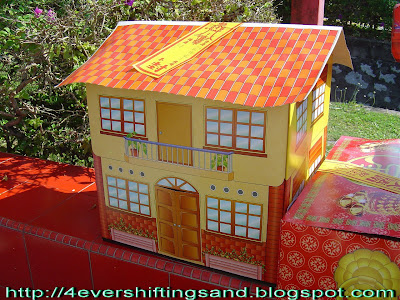 A house for Dad

Sometimes I wonder if those who have passed on actually receives all those paper paraphernalia that we burn. Filial piety should be done whilst the person is still alive and kicking and not after he or she has passed on. Sometimes doing that (my personal opinion) is to show others how filial a son or a daughter we are when we burn tonnes of these paper stuff to them after they are gone. In fact, I'll always wondered to myself, does Dad get all these stuff that we burn? Do any of them get all the stuff that their loved ones burn for them? 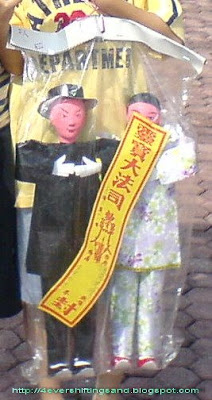 A Maid and A Butler ??
Being a Buddhist, I have been taught that when we die, unless we have achieved enlightenment and is able to leave the circle of rebirth, there are 6 rebirth realms that we will come back to... shan't go into that but if you are interested to read more, then it is all here in Wiki. But whichever way, I am quite suspect as to whether those who have passed on will be able to receive these stuff that we burn each year. I personally believe that it would have been better to do charity work in the name of those departed so as merits can be accorded to them, thus improving their Karma.

I did ask several people about this and of course it will depend who I asked. Most practicing Buddhists would share the same opinion as myself. The shop selling the paper paraphernalia would definitely tell you that the departed will be able to receive these paper offerings. The shop will give you special maps and "envelopes" to put the name of the departed, the date and time of their demise, the offerer's name (mua) and their relationship with the departed (daughter). Sure can get.

My brother for sure believes that dad will get all the stuff that he burns each year. Since 2005 ( we were not allowed to go during the first Qing Ming - 2004 after his passing) until this year, my dear old brother has been burning a car each year for Dad. Each year, the car model got bigger until my Mum also cannot tahan liow. Told him that next year, if he burns another car, he'd better burn Dad a garage too.. buahaha. 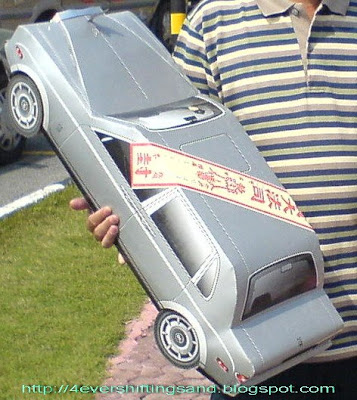 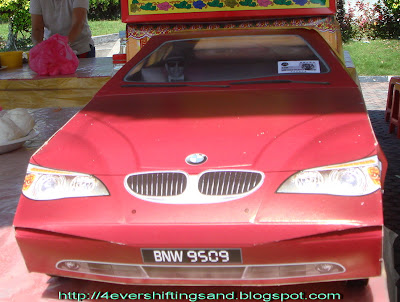 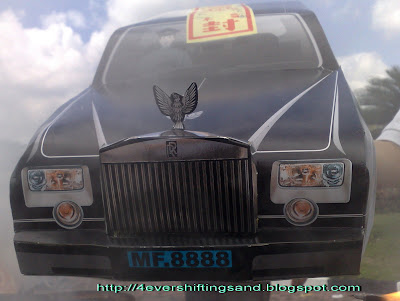 2008 - A Rolls
Anyways, really, if it can be proven that the departed are able to receive all these gifts that we "send" then I would like to start investing in my own ahem..well being.. when I leave this earth...now that they have the OSIM massage chair, I don't mind one as I cannot afford one during my lifetime...and a Ferrari, and a Bungalow, and a .......... (the list goes on).......(Mum thinks I am being morbid!)

hahaha...hey Y..you know what? I've had the same thoughts too. Since I can't afford the big bungalows, sport cars and all the crazy luxuries in this lifetime, maybe ask people to burn for me lah. Cheaper a lot mah hoh. haha.. :p

babe: yeah hor.. i was thinking not a sports car next year.. but a lorry.. bigger than the Roce Royce (Rolls) wor haha.. mmm..petrol station? nvm, next year we order a oil rig for Dad and a refinery plant :)

supes: ya lor.. this life, we can hardly afford anything luxurious, so we buy all the paper stuff and store in our spare room in the house. later when we bye-bye, make sure people burn those nice stuff for us...

oh kenny, the PDA, CPU is a definitely must...and a digital camera, a modem, a wifi card... will need all that to continue blogging hahaha...

My uncles and parents used to burn these stuffs together with the dead leaves and the whole pile of stuffs after cleaning up the graves, what was funny when we thought about it is if our dead grandparents really received those stuffs, they would be truly pissed to be sorting out the goodies from the whole pile of rubbish there! Haha.. bad of us to making fun of these traditions, huh?

haha..but don't worry gargies. according to the shop owner who sells these paper stuff, only the stuff that carries a marker (paper with name of receiver) will be claimed. the rubbish and stuff.. they won't be amongst the good stuff that we burn..:D