I didn't really do much baking or cooking over the last few days. Was feeling rather lazy. Instead of spending the evenings baking, I spent most of them at the cinema. I watched Iron Man and The Forbidden Kingdom. Iron Man was very exciting and even though I am not really that much of a comic fan, I totally enjoyed the show. Before Iron Man, I think the only other Man(s) I knew were Spiderman, Batman and Superman. Now, one more Man on my list. 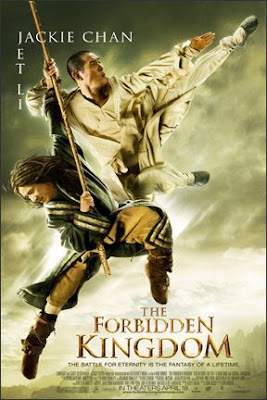 However, I was quite disappointed with The Forbidden Kingdom. Even though the movie boasted of 2 mega Kung Fu Stars in the form of Jackie Chan and Jet Li, it was supposed to be a fast paced and highly interesting. But sadly, I actually fell asleep at least twice during the movie. Sigh...yeah... I might have been sleepy as I was watching the 11:10pm show, but I watched Iron Man even later, at 11:50pm.

I went into Rotten Tomatoes's website this morning just to find out if there were others who shared the same view as I have on the 2 movies and hey.. I am of the same opinion as the majority of the movie goers. Iron Man has all the new moves, whilst Forbidden is all the same old stuff. I had the feeling that they were just selling Jet Li and Jackie Chan and that was where it all stopped. Watching the Forbidden movie was really a yawn from start to end.

Sounds like I need to go catch Iron Man then. :)

hi meehoon. thanks for dropping in. oh yes, you'll like Iron Man.. he is cool and funnee too :)

Looks like almost everyone we know seem to have already watched Iron Man huh... haha...So fast lah you all..we're planning to watch it sometime this week!! Can't wait! :p

Iron Man should be the better movie, but it's Jackie Chan lar...... good or bad, have we ever NOT stop watching him?

ah langkapo..a die-hard fan of jackie and jet li :)? well, you enjoy the movie yeah..but do try and catch Iron Man too :)

Like I said already..... no matter how ridiculous, how bad, and how terrible the movie is, when there is Jackie Chan in it....... can we even say "Hey, let's not watch it, it got bad review. Let's watch other shows."
can we?
It's Jackie Chan!!!