Of late, there have been news of people passing on and mostly from cancer or heart attacks. I have lost an uncle last year from pancreatic cancer. Just last month, I've lost a colleague to throat cancer and my friend JW has just lost her uncle last week to cancer too (throat cancer too, if I am not wrong). A couple of days ago, we read of the demise of one of Malaysia's illustrious sons, Tan Sri S.M. Nasimuddin S.M. Amin, founder, chairman and chief executive officer of the Naza Group to lung cancer. Apparently, his wife Puan Sri Zaleha Ismail is also undergoing treatment for cancer. And I just got a sms from my brother telling us that another of our uncles have just passed on in Ipoh. May have to make plans with the family to attend his funeral.

Sometimes, things happen which can be classified under "meaningful coincidences". Whilst I was just thinking about death, I received this email from my friends Zul and Fathiah. They sent me an email about a 10-minute talk given by professor named Randy Pausch, who has been diagnosed with pancreatic cancer and only has a few months left to live. His talk is not about death however, it's about achieving your childhood dreams and how to live your life. This was taken from the Oprah Winfrey show.

Watched the video and found that this man didn't wallow on the fact of his imminent death. Instead he talked about how he has lived life and how he intends to live it today, tomorrow and every day. The 10min albeit short, was very inspiring. I wonder if I would have the strength he has if I knew that I was going to dying within the next few months or a year. Or would I be like a pig, wallowing in a sty full of self pity. My Rinpoche has told us often enough that "Death is a certainty. Only the time of death is uncertain". But we choose not to think about it until someone else passes away. 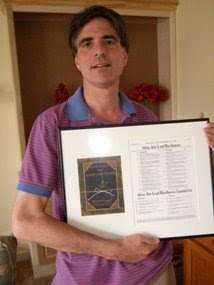 I tried to google for the latest status on the Professor. Apparently, he is still very much alive. His original intention was not for a lecture series for hundreds of people at the Carnegie Mellon University, but for 3 important persons in his life, his 3 children.

For more reads on the Professor, click on these:-

sorry to hear about your uncle.

i loved this Last Lecture!

Yeah, glad to see people who are still optimistic about life despite being diagnosed with cancer.. My Superhero Dad passed away from brain cancer almost 5 years ago..he suffered for almost 5 years before he eventually lost the battle..But I would say it was a battle well fought. :)

babe : thanks. sometimes death is a preferred alternative to pain...sigh..

supes : sorry to hear about your Superhero dad. Cancer is one of the most painful way to go and it takes great courage to continue to fight it.