I went out to this place called NiuZeXui (in Mandarin) aka Ngau Chay Sui (in Cantonese) aka NZX (in English & Malay..hahaha) at Ara Damansara for dinner last nite. This is a relatively new place (at least to me lah but I think it may have been around for a while) and the first time I heard of it was from my electrician, Eddie. When he first mentioned Ngau Chay Sui, I only knew of a Ngau Chay something in Singapore.

Within the same week, as I was catching up with my favorite blogs, I saw this place being mentioned again in "You Get What You Give"'s post. That was when I made up my mind to go and check out the place and the food of course :). The place was interesting and the food was quite nice. But their portions were kind of small.. for my big appetite. Do read all about it at WMW's post here.

Anyway, back then I have already decided to return to NZX soon but to try out this place called Restaurant Hao Wei Dao. I was quite attracted by the deco of the place and I did get a peek at their menu before I left. They seemed to have everything I like, from breakfast serves of toasted bread and buns, to a wide selection of noodles, rice and tong sui (desserts). 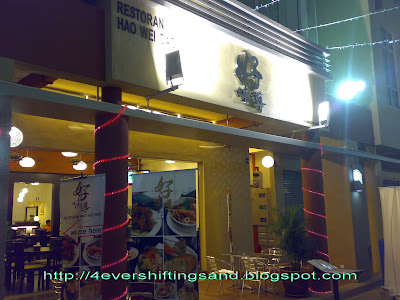 We got there about almost 8pm last night. There were only 3 tables of customers, including us. It was not surprising as the place is right plunked in the middle of the condominiums and really without some directions to get into the Pusat Dagangan, one may just easily miss the location.

Managed to get a copy of the map here. 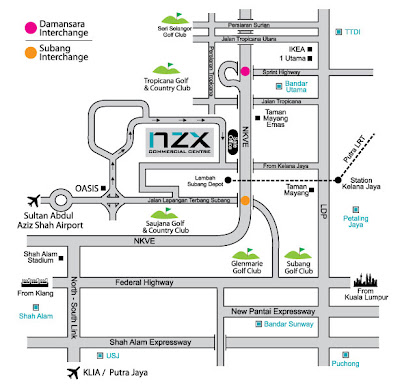 Back to my meal last night. There were lots of options and it was really a hard decision to pick the one I liked to try most. In the end, we decided on the Seafood Mee Suah,the Qi Zi Soup La Mee, a Calamari as a starter, a Red Bean Black Jelly to share and 2 chinese tea.

I must say that the noodles itself was standard but the soups... my oh my... the soups were lovely. The seafood soup taste very "seen".. how to say that in English...very fresh and seafoody haha. The Qi Zi (wolfberries) soup was so authentic that we simply had to order 1 serve of large rice to finish the soup.. super yummy. 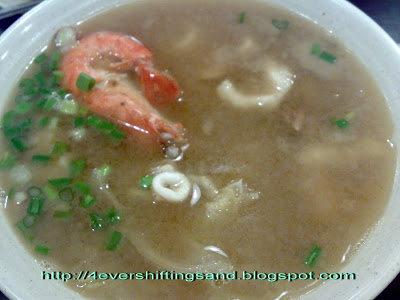 Sorry about the lousy photo quality...blame the photographer (me) and not the equipment :) 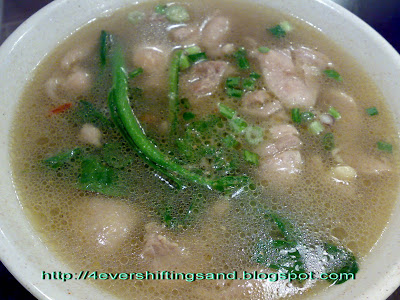 Qi Zi Soup La Mee
The Calamari was crispy outside and nice and soft inside. Definitely a must have for me on my future visits. 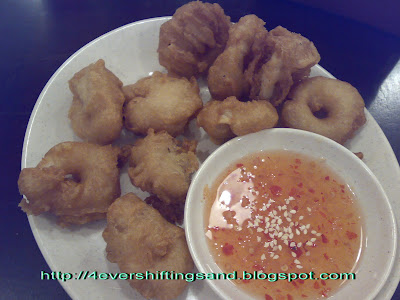 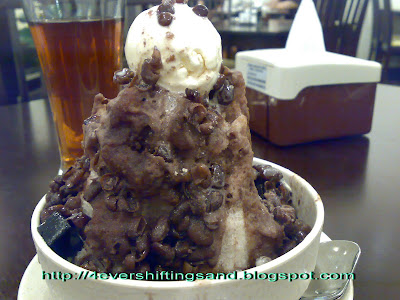 The Red Bean Black Jelly was a tad disappointing for me as it was rather bland. Maybe I have had a bit too many of the lovely sweeties from babe and sue in the morning that my "sweetness" taste-nob on my tongue has been leveled up a couple of notches.

And oh, I need to mention this. Got my friend to go in to take some photos of the shop's mural (too chicken to do it myself.. not that good of a blogger yet you see... and also too full to get off my arse to do the job) and he started talking to one of the owners of the place, Alex Tan. 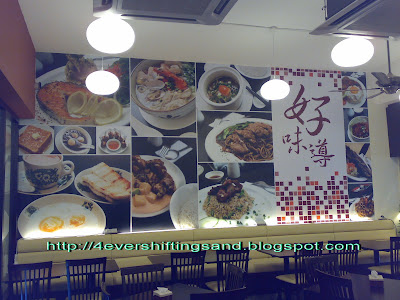 The wall that Alex is so proud of ;)
Alex was apparently used to having his customers take photos of his restaurant but it was because he thought it was his mural that attracted these customers. My friend told Alex that we were going to put it on our blogs and that really got Alex's attention :). He started talking to my friend, asking him a lot of questions, whilst I was fidgeting outside wondering "how long does one need to take one bl**dy picture of a wall".

Finally, my friend came out, with Alex tagging behind (coz an old gentleman, which I assumed was Alex's relative suggested that they should sit down comfortably to chat). That's Alex in the singlet
Alex sat down at our table and chatted some more about how this blogging thing works and Alex seems pleased. And to think that his previous customers were taking photos of his shop for the beauty of his mural (haha..it was just a photo collage), but now Alex understood that these customers were probably blogging and advertising for him. Bet that made his night.

Alex, we are coming back to try out the rest of the items on your menu. See you soon!!

Will definitely try out the taman desa outlet...haha... :p

oh..yes..do let me know if their soups are as good over there :)

i tried the food there. It is good.U should try the chicken chop it is delicious but filling (for the big stomach people). The pasta is better than the norm and has a wide variaty (the green fettu is very special cooked from green olive oil a little oily).The drink are good and has a even wider variaty and is very nice(ice lemon tea- for sweet lovers, plumjuice- for sour lovers, coffee- for busy workers and so on....).The soup is great and the mushroom soup is a must try!!! The one that I liked best was the qizi soup is the best!!(a little costly but very tasty)

hope u try it

Hi doremon. Thanks for the suggestions. I will definitely want to try pasta (esply for a greedy person like me) and the sour plum..mmm..drooling already just thinking of it :)