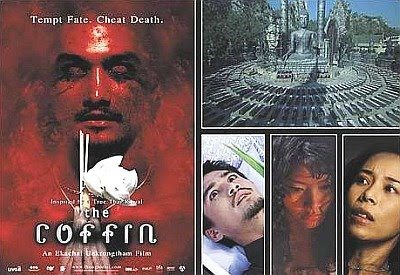 Picture taken from TheStarOnLine - Courtesy of The Coffin producer
Last nite was the eve of Halloween and guess what? Just for the heck of it, I went to watch "The Coffin" with Tobiyama. I actually had very little clue as to what the show was going to be about except for the fact that it would have something to do with a coffin. Boy, was I wrong. There were a whole bunch of coffins in the show.

The show started with a girl in a coffin and sure enough, a thing that most of us dread when we see a corpse in a coffin do is for the corpse to open its eyes and make a grab for us. Sure enough, the corpse did open her eyes and a beautiful pair of eyes at that. She is not dead. In fact, she was introducing to the audience a true Thai ritual of lying in coffins to get rid of bad luck and to prolong life. And so starts the supernatural thriller about a young man and a young woman who decided to go through this ritual with very personal objectives of doing it.

Chris, a claustrophobic architect does it in the hope of saving his fiancée who's dying of terminal cancer. Sue, a nutritionist visiting Thailand from Hong Kong does it to save her own life after being diagnosed with a lethal brain tumor - one week before her wedding.


After the ritual, Chris and Sue experience what appear to be miracles in their respective lives. But soon, they find themselves confronted by a series of bizarre and terrifying incidents. With the help of a professor specializing in paranormal cases associated with the ritual, they set out to exorcise the ghosts that haunt them, and attempt to reverse the wheel of karma.

Thrilling, mysterious and ultimately moving, The Coffin is a spine-chilling horror about the beauty of life and death, and coming to face to face with living and dying.

This is quite an interesting watch.. even though quite a lot of what I saw was seen between my fingers which were covering my eyes. Actually, it was not really that scary (sure, now that it is broad daylight), it is just that dread of seeing dead people in your closets and that every time you watch Karen or Ananda turn around, some dead girl and guy is sure to jump out.

Go watch it, especially if you are quite sick of all those macho stuff like Bangkok Dangerous or Maxie Pane hero type shows. I would rate it a 6/10.