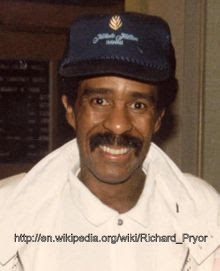 As you know, it has been kind of a rainy weekend and having really no place to go, I decided to clean out my stacks of old VCDs. Have not really had a good look at these for a long time, since the day the DVD came in and the VCDs took a back seat.

As I was going through the stack, I realize that there have been quite a number of good actors which are no longer with us today. One of them is Richard Pryor. He passed away in 2005. He was really one of those comedians who only had to appear on a show without many lines and still be able to make me laugh.

I still have VCDs of his "See No Evil" and "Superman III". Wanted to play them but I think I must have left them in a damp place as there some bits off it seemed to have grown moulds. Dare not it into the player for fear of spoiling it. But I am sure I will be able to find these in the local DVD shops for I believe that they are truly classics :)

Plot taken from Wiki " Richard Pryor plays a blind man named Wally Karue and Gene Wilder plays a deaf man named Dave Lyons. They meet in Dave's shop, where Wally wants to get a job. After a few complications, Dave hires him. As Wally goes outside to get the newspapers for Dave, a man (Wally's bookie) comes in and asks Dave for some antacid (Dave reads lips). Playing for some time to hide a valuable coin, the man asks Dave to read the back of the packet to him. As Dave is reading it, the man slips the coin in a cigar box (for tips), hoping that nobody would find it. After he does it, a tall lady dressed in red comes looking for the coin. While Dave is reading, she shoots the bookie when he fails to give it to her. She slips away and disappears out of sight. Dave didn't hear the gunshot and Wally didn't see anybody but he heard the gunshot. Soon after finding that there is a dead man on the floor and with Dave holding the murder weapon, the two of them are put into jail for questioning. Wally and Dave become the prime suspects and the police refuse to believe them. The two then cunningly escape from the police station. On the run from the law, they are also tracked by the real killers, played by Joan Severance and Kevin Spacey, who want the gold coin in their possession. Dave and Wally must be each other's eyes and ears to stop the criminals and clear their names."