A Wedding Shoot to be remembered

I have been rather busy at work the last few days and as such, I have totally forgotten to share this lot of photos which a friend sent. It is quite sad to be reminded of that awful day but these pictures were taken by the wedding photographer and it will probably be something that he and the bride and groom will tell their children and grand children in days to come. Luckily no one was injured at the place where this happened.

I went on to google the photographer Wang Qiang and found this article "Quake left wedding party in layer of dust".

At the famous 100-year-old Church of the Annunciation in Pengzhou, China.

Very early morning May 12, photographer Wang went about preparing to shoot
wedding pictures for a young couple, this was the test shot before the shoot... 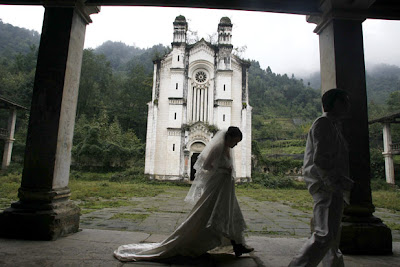 Pengzhou is located in the Sichuan province. It was morning May 12, 2008.
And then it happened.... the earth quake! 7.8 on the Richter scale.
Bricks fall from the building during the earthquake, which turned Wang from a
wedding photographer into a journalist. 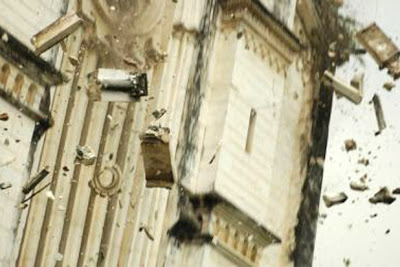 'Thank God we were only shooting from outside the church!' remarked a helper.
The stunned couple huddles together at the church ground during initial tremors. 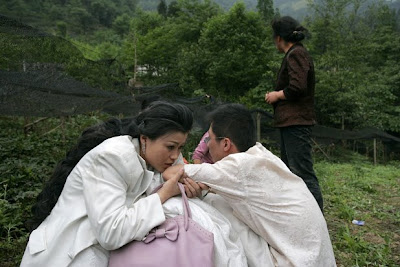 'I shouted to people, 'Run! Run!'' said photographer Wang Qiang.
'The ground shook and we couldn't see anything in the dust.'

As the dust began to clear, the true extent of damage was only beginning to appear...
A cracked facade was all that remained of the 100-year-old Church of the
Annunciation after the quake. Most of the church 'collapsed in 10 seconds,' said Wang,
who lives in Chengdu, capital of hard-hit Sichuan province. 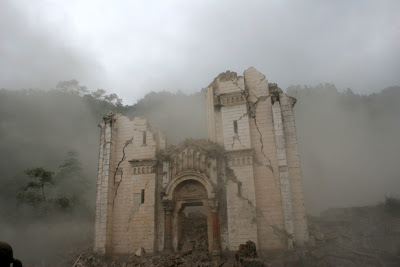 Soon after the quake, the people at the seminary set out for a nearby village,
but residents warned them the route was blocked. 'We could still hear landslides,'
Wang wrote in an online account of the disaster. So they stayed overnight in a
tent and made it to the village the next day, thanks to help from a truck driver. 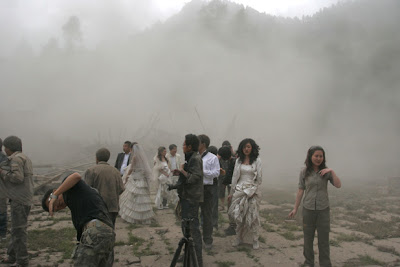 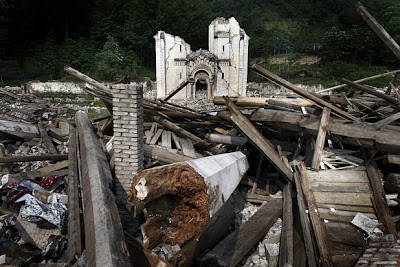 A scarf from a wedding dress lies forgotten in front of the seminary.
Wang said he thought the catastrophe would strengthen the bonds of
the couples who were there that day: 'Having gone through a life-and-death test,
they surely will clasp hands and grow old together.' 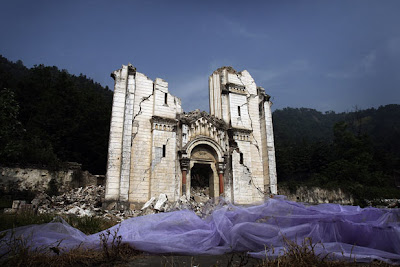 No one was harmed at the above location.

They'll sure have a Wild story to tell there Children! 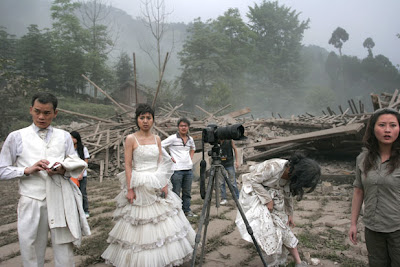 I like the first shot with the bride walking across with the church in the background.

a very natural shot i must agree.. but it will be a photo shoot that this couple will remember for the rest of their lives