These days, everything is about money, mainly the lack of it *sigh*. I have been talking to friends, surfing the blogs and checking the newspapers to find ways of making a little extra. Friends will ask me to join them in their Multi Level Businesses ranging from Products, Services, Unit Trusts, Insurance to aromatherapy. You name it, I would probably have heard of it. Admittedly, I have joined a few but probably have not been doing it right as I am still not financially any better off then when I have just started.

Blogger friends as asked me to subscribe to PayPerPost and Social Sparks. I have registered and that was as far as I have gone. *Sigh* being the ignorant idiot that I am, I don't know what to do after the registration part. I don't even know how the bloggers put up that little badge at the end of their posts. Do they just cut and paste or what.... HELP!! Need to speak to blogger friends like Supergirlfriend and Sue Momster.

If anyone can give me some advise on this, it is most appreciated :)

I was browsing through the newspapers a few days ago and came across an advertisement which read ...

“Who Else Wants To Discover The Secrets Of Starting A Business With Little Or No Money?”

Well, all I needed to do was to register for a free seminar to learn the secrets. Mmmmm....should I ??? Still thinking about it.

And since I was still very much opened to looking at options, when a friend asked me out to for a drink to brainstorm on this issue,without hesitation, I agreed. Like I say, I am open to suggestions. We ordered our drinks and as usual, started bitching about life and wished life was still the cheap magazine it used to be...haha.. old private joke of ours - 1st issue of Life Magazine was sold at 10cents. We were toying with ideas of starting our own e-business to selling stuff at the flea markets. When she suggested pasar malams... I told her that we'd better not. What if we get "dishhed - hantam" (slaughtered) by the tai-kors (triads) who rules these pasar malams (night markets)? Haha.. better stick to the flea markets.

We didn't get anywhere. Maybe we needed a bigger think-tank group. So, we said our goodbyes and went our separate ways. As I was walking along (opps sorry, I was at Subang Mentari area), when I saw this large sign which read CASH CONVERTERS. Mmmmm.... interesting. 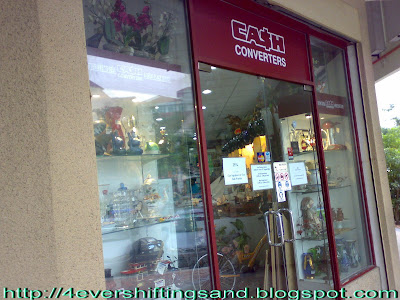 Went inside to KPC (check it out) and found that they had quite a lot of old (some used and some unused stuff) for sale. I was not allowed to take photos inside, so, instead I took some photos outside. 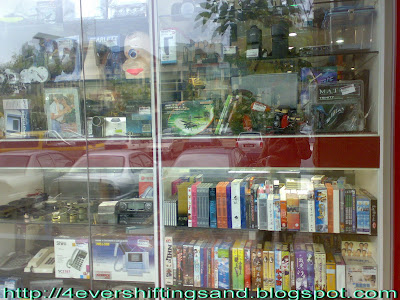 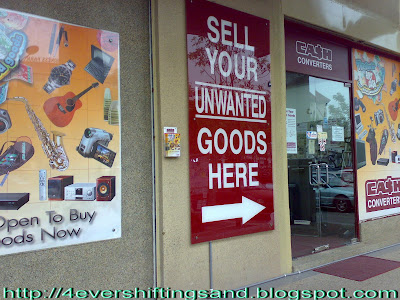 Mmm...that is an option to get some extra money too. I know that I have some stuff in the house which have not been used. They've just been there lying around taking up space and collecting dust. The United Subang Jaya Web Forum has some postings on this outlet. Next to this outlet, across a little lane was a Pajak Gadai (pawn shop) - the yellow signboards. 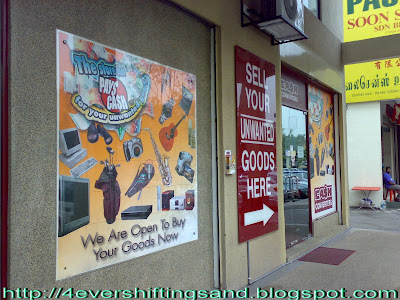 See...right at the side of the pic, there was man who was watching me. I think he works for the pawn shop... and being the coward that I am, I dare not take a direct picture of his pawn shop *sweats*.

So, I think there are still options to make a little extra money but we just have to search for it. And perhaps to find friends and to network with the right people. My search will still continue but at least I know where to dump off some of my unused stuff for a little bit of money :). Hope this will help anyone who is reading this post and like me, is just trying to look for ways to make a little extra cash.

Haha...I just had to leave a message here because dear Y mentioned my name and linked it to sponsored posts..Paiseh paiseh...! *blushing*

Actually I'm new to all these too..but I'd advise you to go for SocialSpark. Payperpost is not really performing well already now.

Just buzz me at gmail chat when you see me ok..haha.. :p

okie dokie supergirlfriend...thank you for leaving a message here for me :)...for this, you deserve a very special cuppie.. you are top of my list the next time i do cuppies with toppings

Only when the advertiser require for a badge, they will provide one in code(html kua) format. You paste the code at the end of your post.

I'm actually trying to find ways to get more money. Hahaha. Don't bother selling your stuff at cash converter. They pay you very little. Try selling them in eBay. Really works. I'm thinking if I can make some real good cookies, perhaps I can sell them in flea market or online. First must think what people 'want to buy'.

thank you che-cheh..now at least i am a little smarter :D. selling at ebay..that is a good idea. maybe i will check out mudah.com.my and lelong.com.my too.

btw, i am researching into this e-market thingy plus maybe pool some interested people to start off the flea market thingy. I believe that there is courage is numbers teehee. would you be interested che-cheh? we will mainly sell cuppies, cakes, tarts and stuff like that :). do let me know if you are interested yeah

Yo.. Friend. I am interesting too... I have been thinking lately to how to find some extra cash. Working part-time is one way, but i need way that could generate revenue itself.

Oh, maybe going to be seeing you in the Curve's flea market there? Ok, promise will pong-chan your tarts or cookies (don't sell too expensive la, you sell cheaper, I can buy more also.. hehe)

Any thoughts about learning forex trading? I once went for a training on that, but didn't have time to practise it. I think soon, I'll force myself to pick it back up again. Heard it can bring in some extra cash. Good for people like me who stays at home most of the time as well.

haha.. so very nice of you gargies to show such support..thank you thank you..for you..very special discount :)

forex trading? mmm.. i think one of my gf was doing it for a year or so.. but i don't think she was too successful after the initial interest. i wish you all the success in doing it gargies.. extra cash is always welcomed :)

my dear if you need to copy the code and paste it on your blog. But it depends on the advertisers requirement, some dont need to. Buzz me if you need help.

hi suesue..thank you for the advise and i will buzz u on msn if i am stuck again :p.. cheers

Why not go for free seminar for hearing and get some information and share at here...I know this free seminar but haven't been yet...Will go in future..

Why not go for free seminar for hearing and get some information and share at here...I know this free seminar but haven't been yet...Will go in future..

hi liew.. i think that is a pretty good idea. in fact, i did attend one at Sunway Mentari a month back.. rather interesting :D