I was walking along the 5-foot way near MPPJ on Friday doing my errands when I saw a poster which read "Durian Bombs". Mmmm.. durian..that was the magic word for me. Went into the shop, was rather excited at the thought seeing what these bombs were. Left my handphone in the car, so I was not able to take the poster outside the shop but it looked similar to what they had on the box. 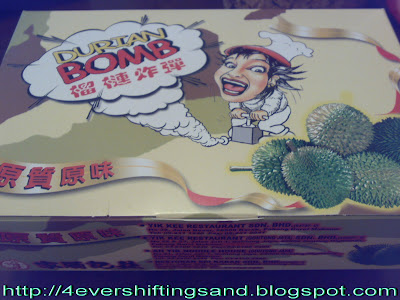 Oh this is one of the outlets or were they distributors of the goodies that Babe told me about a long time ago... Restaurant Sri Karak. 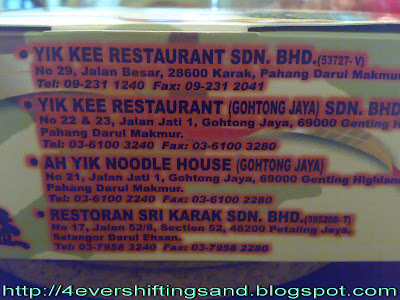 They had quite a good spread of pastries and breads but my intention was to go in to try the durian bomb and their durian tart. But when I looked at their siew pow and egg tart, I decided to get one of each to go. The clever salesperson who served me said "Miss, if you get another 2 pieces, we'll put them in a nice box for you". Sigh.. ok lah.. picked up a chicken pie and a curry puff. 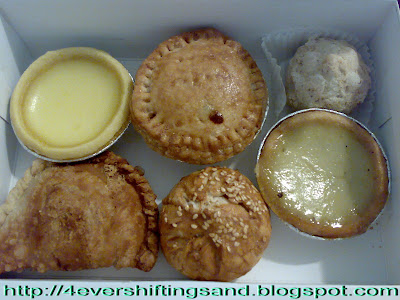 The tiny little round thing at the top right hand corner was the durian bomb. It was so tiny and it looked nowhere near how I imagined a bomb should look like. 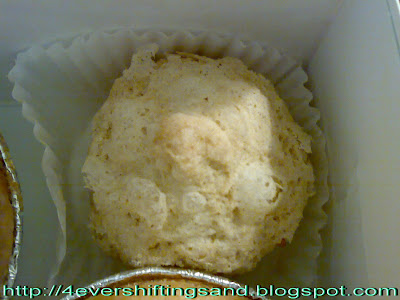 The pastry looked a little like the yam puff but the pastry was not as crispy or light. When I broke open the bomb, I was rather disappointed. The filling was so little that you better not breath too hard or it might just fly off. 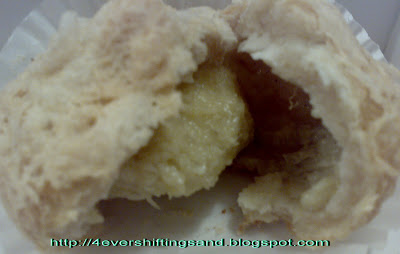 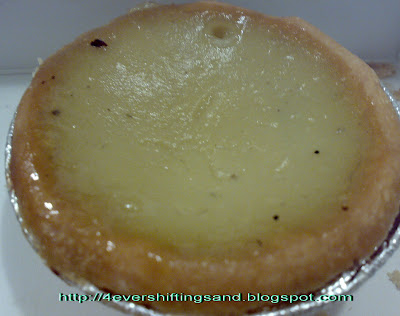 Durian tart
Overall, I was rather disappointed with the pastries there. The siew pow's filling was dry and the rest were average, at best. 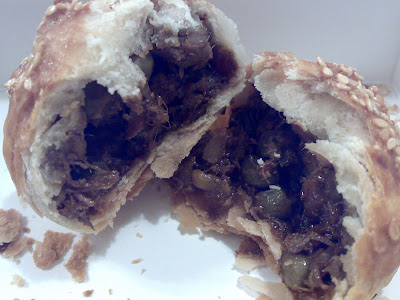 I am not sure if the prices of these pastries were cheaper than other places. If they are, then perhaps that could explain their quality :( yah lor.. so small hor.. they should have called it durian bullet buahaha

I've tried that some years back, bought from the outlet in Gohtong Jaya. And that was also the last try. Not my cuppa. Real kampung durians remains the no. 1 favorite. And speaking of that, they are all over the place now, and I should be having another round today as well! Haha.. thanks for reminding! (indirectly)

hi gargies.. i agree with you that real kampung durians are the best :). maybe we should trying making some homemade durian pastries? what say you :)

i am really sorry to say that nothing that i bought really tastes exceptionally good. At best, only average :(

i definitely agree that seremban siew bao is better but they were the best when they first started. These days also shrinking in size and also a case of "tow kong kam liew" - reducing both workmanship and ingredients :(

I don't know how to make durian pastries, as before I can turn the durian into tarts, it's all in my tummy liao!

Agree that seremban pao's not very good now. Very dry to me.

haha..i think most of us have that problem of eating up all the durians before we can turn them into tarts :)... but durians are best eaten fresh.. as it should be :)

What D number is the Mao Shan Wang durian?
Is this next link, the best 'Durian Blogspot'?
http://yourworship.blogspot.com
Isn't cloned/cultivar durian,eg D1,Kunyit etc , better flavour than Kampung durian?
Raw Durian is healthier than any cooked durian.

hi FatHer.. i really don't know that much about durians except that they are really a God sent fruit .. wah.. i can almost smell and taste the fruit as i am replying to your comment :D