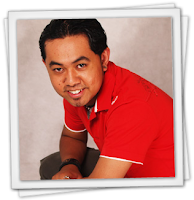 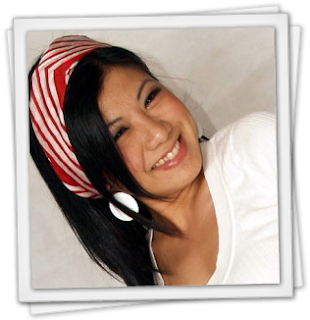 One of my favorite Radio Channels is RedFM 104.9 as some of you may have already known if you have been following this blog :D. The RedFM DJs, Will and Shaz have always accompanied me to work each workday morning and JD and Dilly will accompany me back in the evenings. Long drives do not feel so bad with them as company. However, since mid December last year, Will and Shaz have left the station *sob but the station managed to get JD and Dilly to take the morning session. Terry is taking over the Evening Drive but I am still getting used to him. Oh well... like they say, the only constant in life is change.

Anyway, one morning, JD and Dilly were doing the Australia free movie passes thingy and I decided, oh heck, it has been a long time since I won something from them (4 tickets to Indiana Jones which I also won during JD's and Dilly's Evening Drive program), I decided to just send in my sms. In less than 2 minutes, my handphone was ringing and when I picked it up, wow... two of my favorite DJs were on the line. We chatted some and I told them that I was almost a stalker haha.. followed them from their evening program until their morning one :).

JD told me that I was the lucky 9th sms to come in and for a chance to win the RM400 Air Asia Ticket to Australia, he asked me to tell him why I would want to visit Australia and I told him this...

"I'd love to see the Men Down Under and have a Vegemite Sandwich with them whilst Waltzing the Mathilda. I'd be so happy that I'll be hopping alongside Skippy the Bush Kangaroo"... or something similar to that as I have already deleted the sms.

HaHa .. for that silly idiotic answer, JD and Dilly decided to give me the 4 Cinepasses to watch Australia the Movie but not the Air Asia Ticket. Instead they gave me a premium prize in the form of a bag. I only found this out when I went to collect the Cinepasses last week. Geez, thanks JD and Dilly.. *hugs. 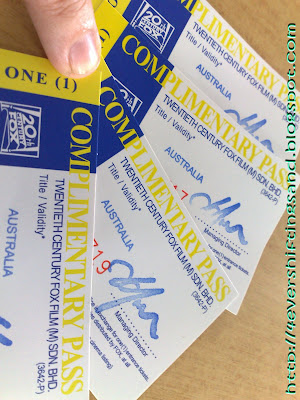 4 passes, of which two have been given to Joyce and Jean. 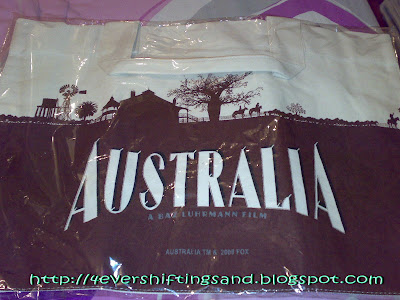 This is the nice Australia bag I picked up too.
Heehee.. you see, I am easily bought and am totally bribe-able. I am now the RedFM 104.9 live supportable. Happy Happy start to a new year :D. Cheers!

I'm not so lucky with these contest things. Have yet to win anything!! ;-)

The bag is pretty.
Tell me ya Australia nice or not. This movie didn't receive well in US.

Irene, Angie, Che-Cheh: thanks dearies...yeah.. so nice to win things :D. Have tried a few times before but didn't win anything.

Can only watch the show when there is "Free List". Maybe can watch liow by next week. Will let you know if the movie is worth paying cold hard cash for Che-Cheh. Cheers ;)