I received an inviation to a birthday party 2 weeks ago and I told myself every other day not to forget to attend. But at the end of the day, I still didn't make it. Why? Coz I got the time wrong. I didn't realize that it was from 11am to 2pm. I deserve 2 knocks on the head and 1 kick in the arse. 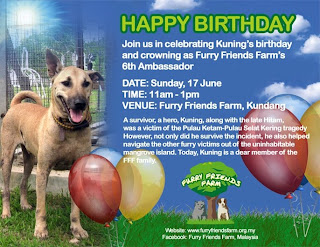 I had so wanted to go as it was Kuning's birthday party. Kuning is one of the 2 heroic dogs which saved their fellow dogs from death's door.

"During the Rescue Mission, 2 very brave and intelligent heroes, Hitam & Kuning, assisted greatly by guiding some their canine friends to safety from the mangrove island. Both of them had belonged to the fish farm. In the amazing story of Grace, this very courageous dog had swam all the way from the mangrove island to the fish farm. Hitam greeted Grace and led her to have a meal at the lower deck of the platform. Grace was subsequently rescued, given medical treatment, rehabilitation and is currently enjoying her life at Furry Friends Farm (FFF)."


Anyway, when I was ready to leave the house for FFF, it was already close to 3pm and that was when I realized that the party has ended (*sob). I also realized that I had no idea how to get to FFF as I presumptuously thought that there would be a location map attached. But no amount of searching in the entire internet gave me a clue as to how to get to FFF. I tried calling my friend Sue but she could not help as she has always been a passenger and not the driver whenever she went to FFF. Finally, my boyfriend,  Trevor decided to call Sabrina Yeap (the founder of FFF) on her mobile. There was no reply but I was sure that she must be very busy working. We decided to go anyway as we thought, 'how big could Kundang be".

We must have toured the entire Kundang town, which seriously was not that big, for more than 45 mins. Most of it was taken up by the Golf course and a huge lake and several fishing ponds. Finally, we managed to get through to Sabrina who assured us that we were definitely on the right road (if you can even call it a road) when we were going bumpity bump on this off-track dirt path, with the golf course and a fishing pond on our right and the sight of the highway off our left. It was past 5pm when we finally reached FFF. But the trip was really worth it. Trevor and I got to meet Sabrina and John (a warm and friend volunteer and friend of FFF) and so many doggies. We checked out the doggies and were informed that some of them have already found sponsors. I asked to see to puppies and immediately I fell in love with little Brenda. She was the tiniest of the lot and John told us that she had to be fed separately or else she will not get to eat. I decided on the spot that she is the one that I want. There were just so many to choose from and I just wished that I could sponsor all of them. As I carried Brenda in my arms, the rest of the other puppies were all around me, with their puppy dog eyes beseechingly asking "sponsor me too, please?". I decided to sponsor Brenda's brother Simmo as well. They have another sister, but I could only handle 2 for the time being. That is when I decided to lure Trevor from the other side (he was happily playing with the bigger dogs) to come over to the puppies pen with the hope that he will sponsor Brenda's elder sister. After a tough time deciding, Trevor decided on Christy, a little puppy with big doe eyes that melts your heart. So, after having made our decision, we asked Sabrina if we could take some photos and she said "Yes, by all means". So, we took some photos with our little darlings. It was time to go as FFF closes at 6pm. We didn't get to meet the kitties....awwww...next week then (coz we are coming again...promise!)

That was when Sabrina (so wonderful of her) asked if we would like to see Kuning, as that was our intention to visit FFF in the first place. "YES!!" In a bat of an eye, Kuning was led out from where he was resting to come receive us. He is much bigger than I thought he was. And he is your typical gentle giant. He is so lovely and he makes you just want to hug and hug him. We asked for a photo with Kuning and here it is, Kuning, Trevor and I. Happy Happy Birthday Kuning and many more to come! Kisses and Hugs!